In a period marked by reduced uncertainties, an approach characterized by flexibility loses ground to one based on predictability, which in turn necessitates simplification of monetary policy.

S. Tolga Tiryaki is a Director at the CBRT.

The Central Bank of the Republic of Turkey had been conducting its monetary policy within a wide interest rate corridor since the final couple of months of 2010. This approach was quite different from both what other central banks adopted and from the Central Bank of Turkey’s earlier policies. Contrary to conventional practice, the CBRT adopted a band of significant width between the overnight lending rate and the borrowing rate that it applies to the excess bank liquidity that it accepts.

With an aim to keep abreast of the normalization in global monetary policies, the CBRT issued a road map in August 2015 explaining the steps to be taken towards normalization. In this road map and in the following period, the CBRT emphasized in its communications that the interest rate corridor would be narrowed and the framework of funding provided by the CBRT to banks would be simplified. The Bank announced that it would monitor the decreasing volatility in global financial markets as well as the impact of the policy measures that it had introduced after the road map in August 2015; and that provided that these conditions were satisfied, it would start simplifying the monetary policy.

The first steps came shortly after. For instance, the Monetary Policy Committee started narrowing the interest rate corridor by reducing the overnight lending rate in the March-July period. Since 3 June 2016, the Committee has been targeting a balanced distribution of the weekly funding stock over the days of the week. The objective of this approach is to increase the predictability of liquidity policy and to help banks achieve more effective liquidity management.

The Period-Specific Advantage of the Corridor

So what has changed? Why is the CBRT, which once needed a wide interest rate corridor, now going back to a conventional monetary policy framework by taking simplification steps? The main underlying concept here is the trade-off between flexibility and predictability. In the aftermath of the global financial crisis, risk perceptions in international financial markets were improving and deteriorating in no time. Against this backdrop, financial capital flows to emerging market economies like Turkey tended to change direction rapidly and in very large amounts. In this period, the CBRT opted to partly sacrifice the predictability of monetary policy and brought flexibility to the fore. For instance, in the early stages of the wide interest rate corridor in November 2010, the Bank reduced the lower bound of the corridor –the overnight borrowing rate– to 1.75 percent from 5.75 percent, allowing overnight rates on the markets to fluctuate widely. Thus, this uncertainty served to deter very short-term capital flows to Turkey. Another example is the fluctuations at the end of 2011 which stemmed from the deterioration in risk perceptions of foreign investors due to the problems in the euro area. In this period, emerging market economies suffered capital outflows and Turkey was no exception. In response, the CBRT raised the upper bound of the corridor –the overnight lending rate. By doing so, the Bank intended to adjust the tightness of the monetary policy and keep under control the impact of the movements in capital flows on a day-to-day basis by changing the daily funding amount. The CBRT made use of this flexibility provided by the wide interest rate corridor in the last six years. 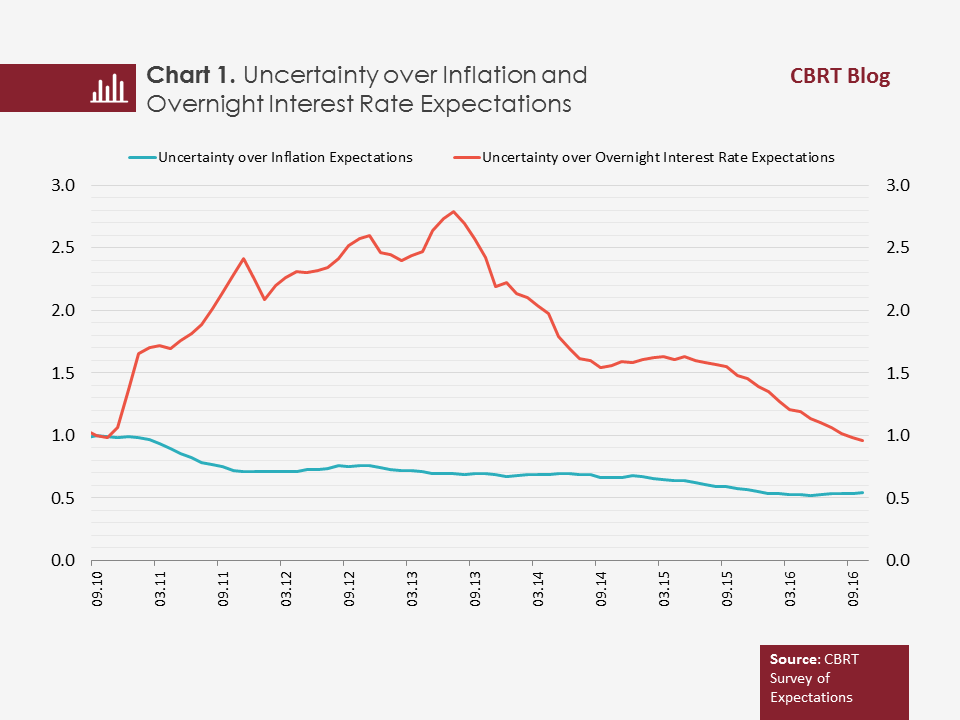 Notes:
To generate the Uncertainty over Overnight Interest Rate Expectations series, the standard deviation of variable for end-of-month expectations for the overnight interest rate at the Borsa Istanbul Repo- Reverse Repo Market is divided by the modified mean; then 12-month moving average is calculated and indexed to September 2010=1.The Uncertainty over Inflation Expectations series was generated by dividing the standard deviation of 12-month-ahead annual CPI expectations (%) variable by the modified mean and then the 12-month moving average is taken and indexed to September 2010=1.

Even if the monetary policy that the CBRT implemented during the wide interest rate corridor period met an important need at that time, it partly complicated the correct understanding of monetary policy. Under the current wide interest rate corridor, the CBRT funding is carried out through two channels: the one-week repo auctions opened daily and the overnight funding provided by the CBRT in the money markets. The monetary policy stance changes in line with the weights of funding from these two channels. Therefore, while it is sufficient to follow a single policy rate to understand the monetary policy stance in a conventional framework, under a wide corridor regime one has to estimate and make judgements about the CBRT’s overnight and weekly funding rates and the funding distribution. (For details of this mechanism, you can read CBRT Chief Economist Hakan Kara’s article on the “Interest Rate Corridor and the Monetary Policy Stance”.)

As uncertainties are waning and the measures stipulated in the road map have reduced the need for a wide interest rate corridor, the CBRT now has the opportunity to simplify the monetary policy and to enjoy the benefits of predictability again. Since the announcement of the road map in August 2015, the CBRT has been taking steps to make the policy rate more symmetric around the one-week repo rate and to narrow the interest rate corridor. The ultimate goal is to conduct the Central Bank funding via a single channel and to ensure that interest rates on the money market fluctuate within a narrow band around the CBRT policy rate. As Governor Murat Çetinkaya stated in his presentation at the Briefing on the July 2016 Inflation Report, the aim of simplification is to reduce uncertainty by facilitating monetary policy communication and to enhance the effectiveness of monetary policy.

S. Tolga Tiryaki is a Director at the CBRT.