The timely, targeted and temporary fiscal measures such as funding support and employment incentives have a high multiplier effect and a significant potential for creating tax revenues, which is expected to limit the impact of these measures on the budget deficit to some extent.

Erdal Yılmaz is an Economist at the CBRT.

Hande Küçük Yeşil is a Deputy Executive Director at the CBRT.

In Turkey, a set of fiscal policy measures have been recently introduced to stimulate production, investment and employment and boost economic activity. The fiscal stimuli that were implemented in 2017 can be grouped under three main headings:

i) measures and incentives towards increasing employment,

In his study, Buiter (2010) listed the following conditions necessary for expansionary fiscal policies to be effective:

The first of the above-listed items points out that counter-cyclical policies would be more effective at times when production and employment are constrained by demand. In case of deficient demand, expansionary monetary policy is one of the policies that can be implemented, however, depending on the kind of shocks, in case of an economic slowdown coupled with rising inflation and inflation expectations, expansionary fiscal policies turn out to be a more feasible option. Nevertheless, for an expansionary fiscal policy to be effective there must be no complete financial crowding out and no complete direct crowding out. In cases where the ratio of debt stock to GDP is low and the maturity and composition of debt stock do not induce sensitivity to fluctuations in interest rates and exchange rates, the financial crowding out effect will be milder and thus, the expansionary fiscal policy will be more effective. 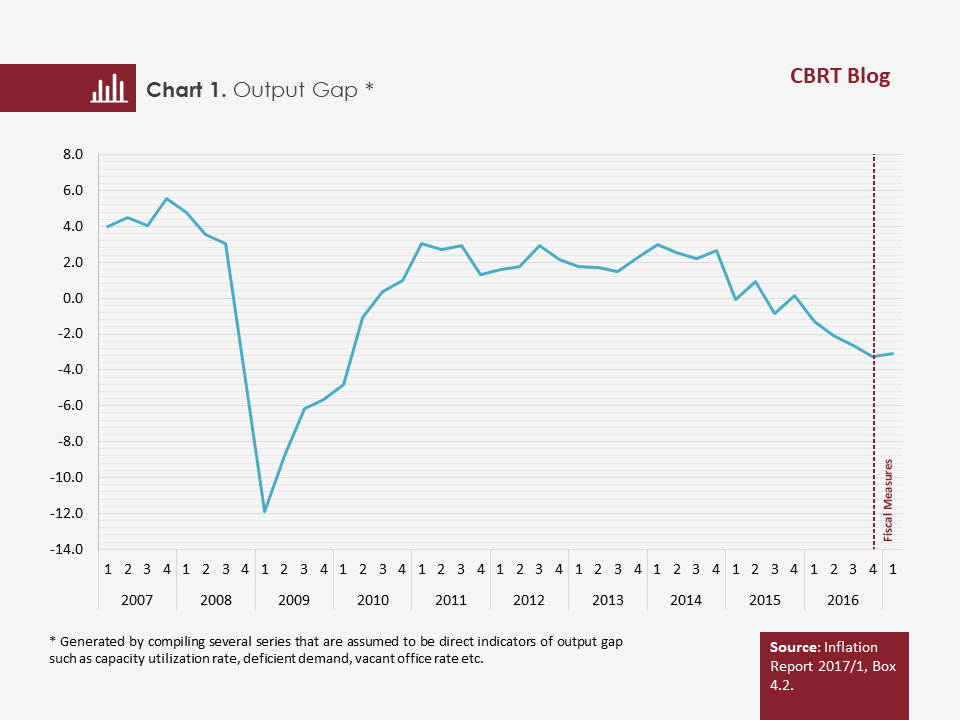 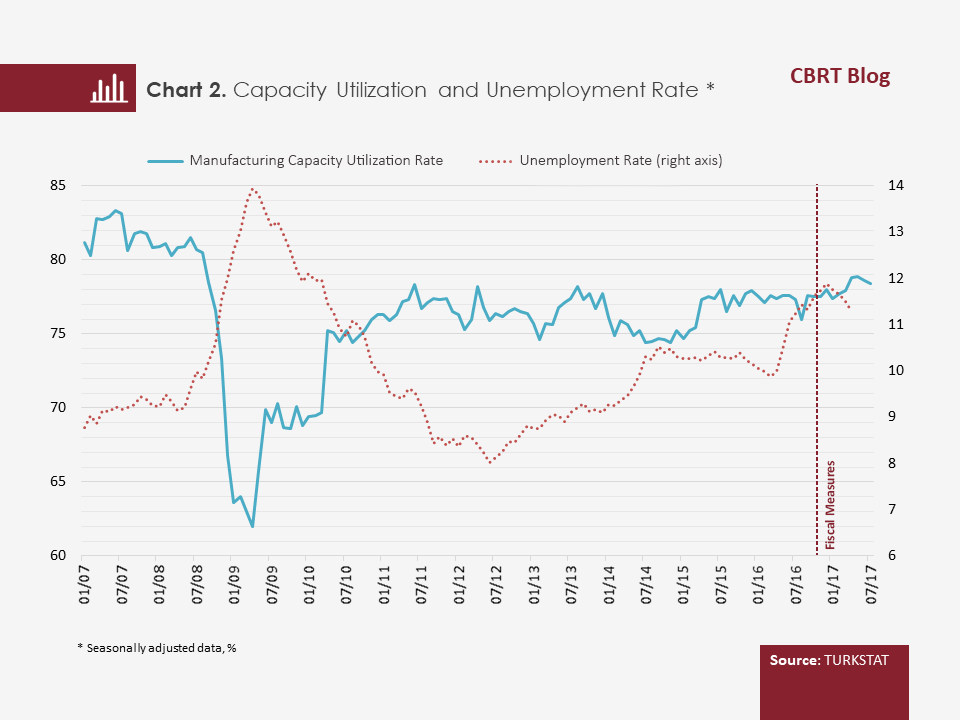 As for Turkey, all of the above-listed conditions necessary for an effective implementation of fiscal policy were satisfied by the final quarter of 2016. Several indicators confirm that the idle capacity had increased in this period (Chart 1 and 2). Expansionary fiscal policy measures were introduced to prevent the slow-down in economic activity and the contraction in credit supply from leading to a negative cycle.  In addition, some mechanisms were put into practice to improve commercial credit guarantees and conditions and some expansionary macroprudential policies were introduced to revive consumer loans. The room for maneuver enabled by fiscal discipline over the last few years has allowed using fiscal policy without exerting a crowding-out effect (Chart 3 and 4). Actually, in the period immediately following the introduction of these policies, a significant improvement was observed both in credits and in economic activity. 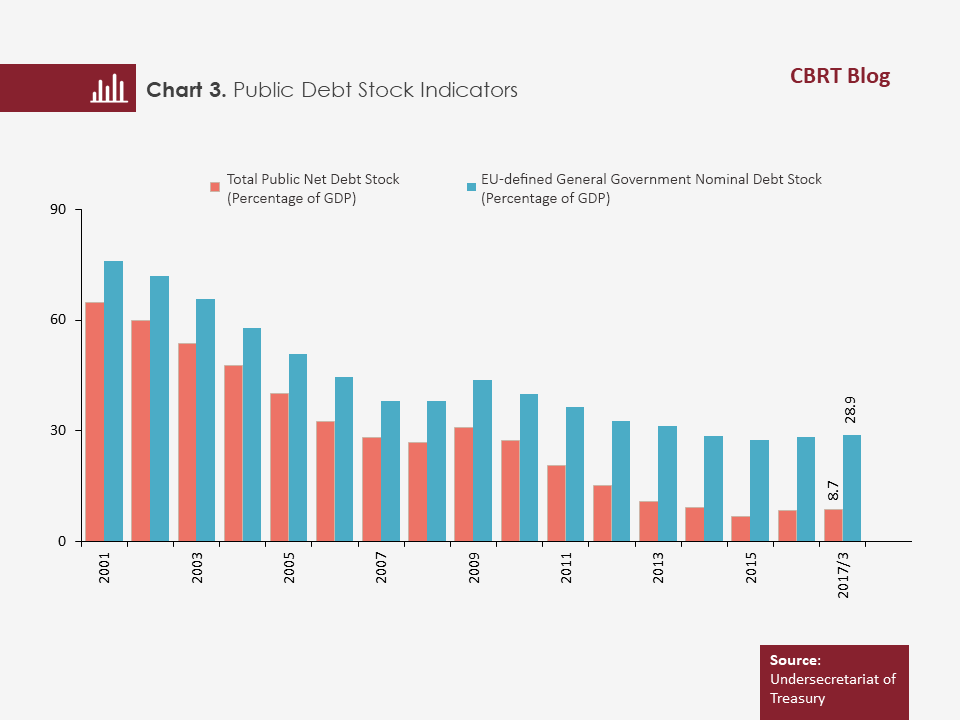 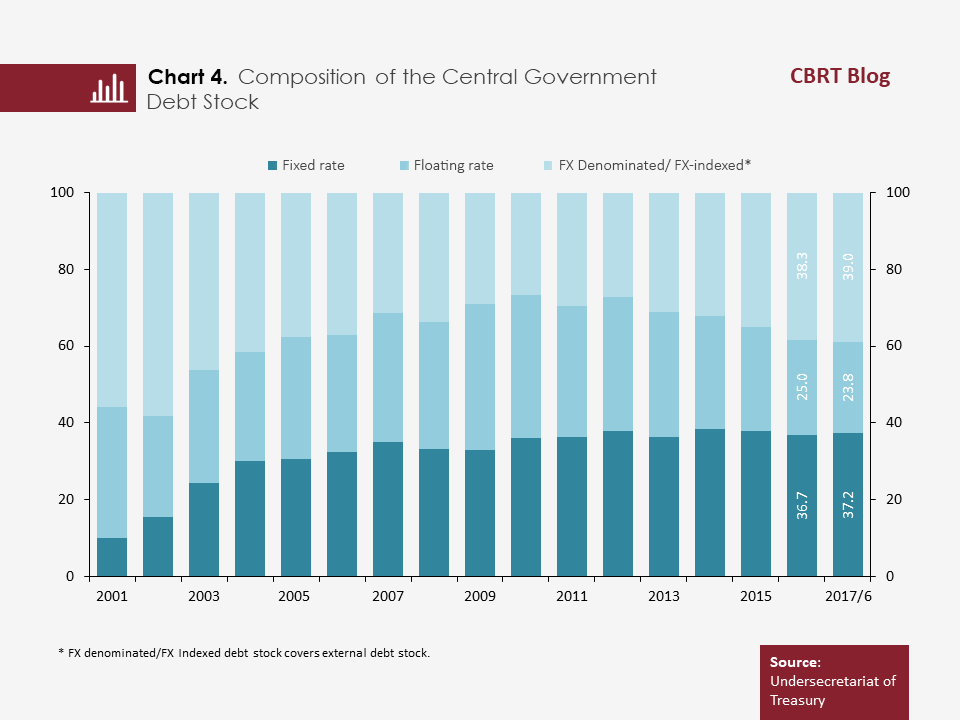 2. What Are the Factors that Set the Effectiveness of Fiscal Policy?

The effectiveness of expansionary fiscal policy largely depends on policy design and on instrument choice besides the conditions mentioned above. The academic literature on this issue led by the studies of Elmendorf and Furman (2008), and Delong and Summers (2012) define four key criteria that a well-designed fiscal policy shall satisfy:

3. How Can Fiscal Policy Be Designed to Preserve Budget Balance?

Delong and Summers (2012) argue that in a slowing economy, the degree of effectiveness of the fiscal policy heavily depends on satisfying two criteria at the same time: increasing economic growth in a short time and preventing debt stock dynamics from deteriorating.

The analytical framework below explains how these two criteria will be met. In the equations, Gt denotes public spending, Tt  tax revenues, and Yt  Gross Domestic Product (GDP). Let us assume that in an economy that has recently started to slow down or has already contracted, public spending increases by ΔGt  in the next quarter.

The size of the contribution from public spending to growth (ΔYt ) will be determined according to the fiscal multiplier (µ):

When the rise in public spending contributes to growth positively, tax revenues increase by an amount as much as the effective tax rate (τ):

In this case, the unfavorable impact of increased public expenditures on the budget deficit (BAt) may be restricted depending on the rate of increase in the tax revenues after a recovery in the economy:

To sum up, for the fiscal policy to positively contribute to growth in the short term without deteriorating the budget balance and debt stock, the fiscal multiplier and the effective tax rate should be high. The fiscal multiplier assumes bigger values when economic activity slows down and fiscal position is strong; it weakens when uncertainty and the private sector indebtedness ratio are high.[2] If fiscal policy directly targets the sectors that are most severely affected by the economic slowdown, fiscal multiplier as well as the effective tax ratio will be higher. For instance, the funding support provided for SMEs via KGF is expected to stimulate several tax items such as the Banking and Insurance Transaction Tax (BSMV), corporate taxes and indirect taxes. Similarly, the employment incentives have a significant potential to create tax revenues taking into account the fact that employed people have a high marginal propensity to consume.

Accordingly, the timely, targeted and temporary fiscal measures such as funding support and employment incentives have a high multiplier effect and a significant potential for creating tax revenues, which is expected to limit the impact of these measures on the budget deficit to some extent.

[2] What we mean by the effectiveness of fiscal policies is the degree to which fiscal stimuli affect economic activity.

Alloza, M. (2014). “Is fiscal policy more effective in uncertain times or during recessions?” University of London.

Hande Küçük Yeşil is a Deputy Executive Director at the CBRT.

Erdal Yılmaz is an Economist at the CBRT.