To What Extent Do Working Days Affect Growth?

When we need to make an economically meaningful deduction on the main trend of economic activity, we need to adopt an approach that excludes calendar effects from the variables.

Çağlar Yüncüler is an Economist at the CBRT.

A significant number of the indicators we monitor to understand the course of the economic activity are affected by the number of working days. In other words, in the event of an increase (or decrease) in the number of the non-working days, we may observe considerable falls (or rises) in these indicators during that specific period. We briefly call it the calendar effect. When we need to make an economically meaningful deduction on the main trend of economic activity, we need to adopt an approach that excludes calendar effects from the variables. This situation is too important to ignore particularly in countries such as Turkey with moving holidays.

How can we calculate calendar effects?

Bridging days and other non-working days

Calendar variables are generally calculated considering the days that are already known as holidays. National days and religious festivals along with weekends are not qualified as working days in Turkey. However, apart from these days, there may be working days which turn into an actual holiday, and thus become a non-working day. For instance, it is possible to extend the duration of the holiday by bridging the national and religious holidays that fall within the week with weekends. We call these days bridging day[2]. Apart from this, a standard working day can be interrupted due to entirely external factors. In fact, evaluating this sort of working day losses and bridging days as a calendar effect is a more accurate approach to interpret the main trends of economic variables.

The Gross Domestic Product (GDP) data pertaining to the third quarter of 2016 is a good example of why we should adopt this approach. According to the raw data, the Turkish economy contracted by 1.8 percent year-on-year and this contraction becomes 2.7 percent quarter-on-quarter in seasonal and calendar effects-adjusted terms. Was, then, the slowdown in the main trend of the economic activity as deep as it was implied by the data announced? Our detailed analyses on bridging days answer this question as no. Because both the Ramadan and Sacrifice Festivals in July and September 2016 were extended to bridge with weekends upon a Council of Ministers Decision. Anecdotal data suggests that not only the public sector, but also the private sector workers had these days off due to the summer season. Apart from this, it is highly probable that the incidents experienced in mid-July had an adverse impact on the economic activity on the following day.

The 0.2-percent annual contraction in the calendar-adjusted GDP series for the third quarter refers to a more moderate decline than the decline in the raw data. The 1.6-point difference between the two figures resulted from the difference in the number of working days between the third quarters of 2015 and 2016. Hence, extended public holidays and the interruption of the working day on 16 July, which was independent of economic dynamics, are excluded from this calculation. For the purpose of economic significance, we should adjust GDP for these effects as well.

Well, how can we make this calculation? First of all, we should find out what significance a regular working day has for GDP. When we adjust GDP for seasonal and calendar effects[3], the coefficient of the calendar variable indicates that working one day less reduces GDP by approximately 0.4 percentage points. In the second step, we should figure out how much of a regular working day the bridging days correspond to, as some firms continue their operations on these days as well. Based on the results we have obtained from the interviews with firms, nearly half of the firms did not work on the bridging days in the third quarter of 2016 and took these days off instead. Thus, we can assert that the bridging day-driven loss equaled approximately 1.5 working days in the third quarter. The same interviews showed us that many firms could not perform their regular operations in the immediate aftermath of the adverse event in mid-July. Therefore, we assumed that the economic activity on 16 July corresponded to 25 percent of the regular activity. Accordingly, we can claim that the non-working days due to these two factors caused a loss of 2.25 working days in total in the third quarter. Multiplying with the calendar variable coefficient, this loss scaled down the economic activity by approximately 0.9 points. As shown in Chart 1 and Chart 2, when this effect is excluded, we see that the quarter-on-quarter contraction was lower with 1.8 percent instead of 2.7 percent and that the calendar-adjusted annual growth posted a modest increase by 0.7 percent instead of a decline. Hence, the slackening in the economic activity in the third quarter may not be as acute as implied by the official data.

To sum up, for a more accurate measure of the main trend of GDP in the third quarter, it is important to take into account and quantify the effects such as non-working days that are not dependent on economic dynamics. However, it should also be noted that these calculations include certain assumptions and the actual effect may have been lower or higher than the assumed effect. 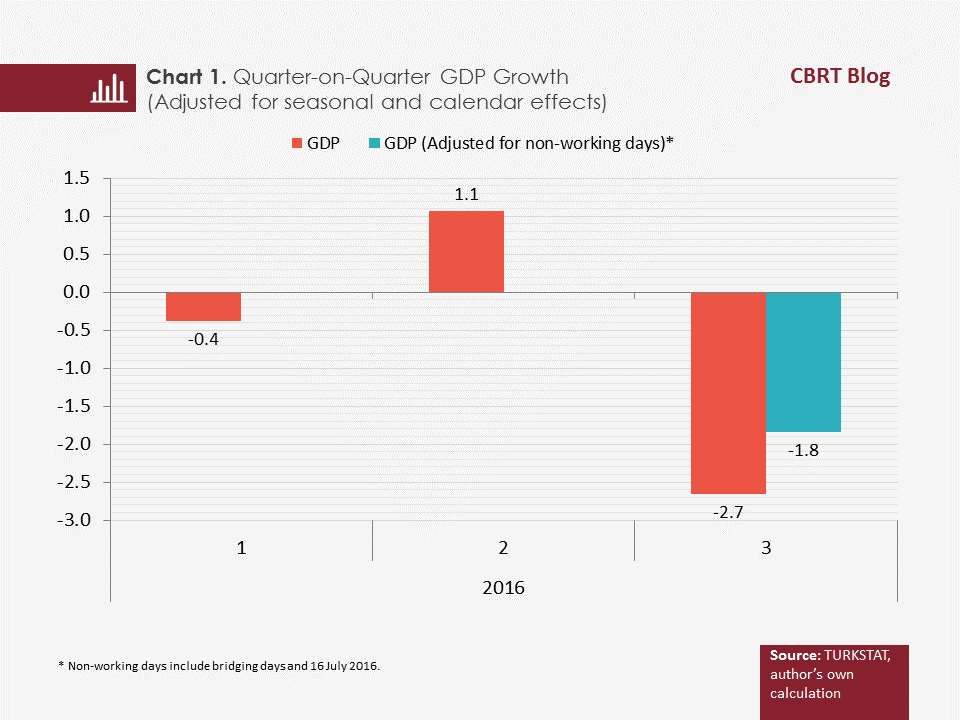 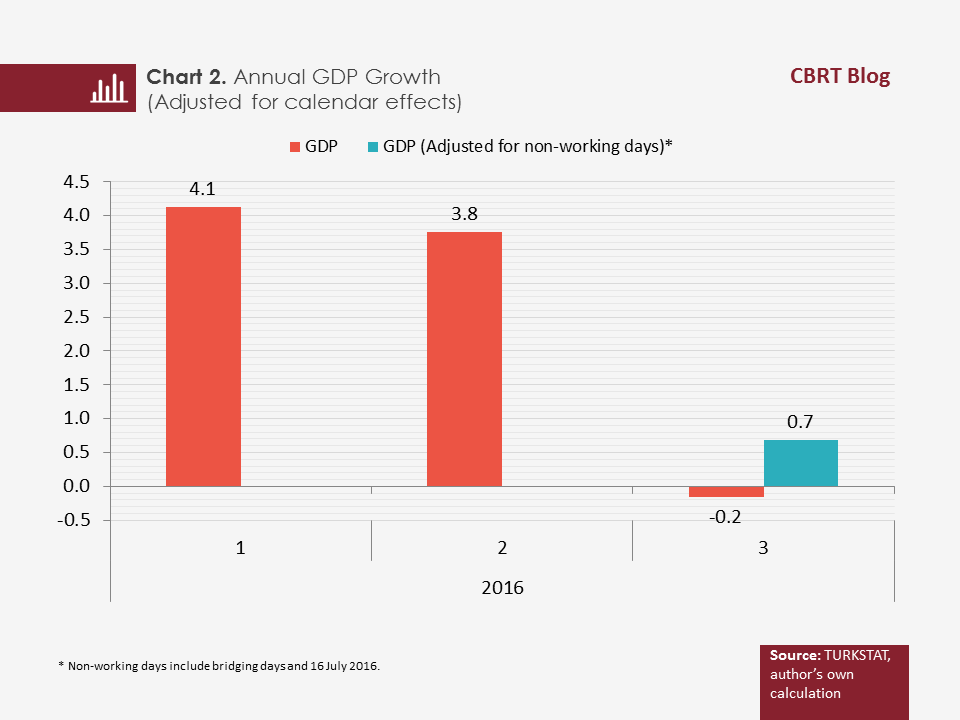 [3] The adjustment has been made based on the model and the calendar variable that is used by the TURKSTAT. For detailed information, please see: http://www.tuik.gov.tr/indir/m_t_metaveri/gsyh_mv.pdf

Çağlar Yüncüler is an Economist at the CBRT.