How Effective are the Regulations to Encourage Personal Savings?

Approximately 6.1 billion TL worth of savings have been brought into the economy since the second quarter of 2016 as a result of policies towards increasing savings. Of this amount, 4.6 billion TL came from AES, 1.3 billion TL from gold-backed securities investments, and 175 million TL from housing and dowry accounts.

The state-subsidized dowry and housing accounts facility introduced in 2016 to increase savings in Turkey, the automatic enrollment system (AES) for individual pension, and gold-backed security issuances have so far provided a significant potential of saving. So then, how have the incentives to increase savings affected the amount of savings? In this blog post, we focus on the policy outcomes.

Turkish citizens under the age of 24 who have not been married by the application date 1 receive state contribution for dowry accounts they have opened on that date or at a later date, provided that they get married before the age of 27. Likewise, Turkish citizens who do not have a house of their own receive state contribution for housing accounts they opened as of 26 August 2016 provided that they buy a house. The rate of state contribution applicable to savings accumulated in these Turkish lira (TL) denominated accounts, which require regular monthly or quarterly contributions to be made for at least three years at pre-defined minimum amounts, increases in proportion to the period of savings accumulation. State contributions may amount to as much as 25% of the accumulated savings (Table 1).

Assuming that a person holds either a dowry or a housing account only, the number of people having these savings accounts is calculated as 36,000 as of December 2018 (Chart 1), while the total amount of savings is around 175 million TL. The fact that the number of savers has reached a plateau of between 30,000 and 40,000 since end-2016 indicates that the inflows to these accounts are very limited. As of December 2018, the amount of savings accumulated in housing and dowry accounts was 106 million TL and 69 million TL, respectively (Chart 2). 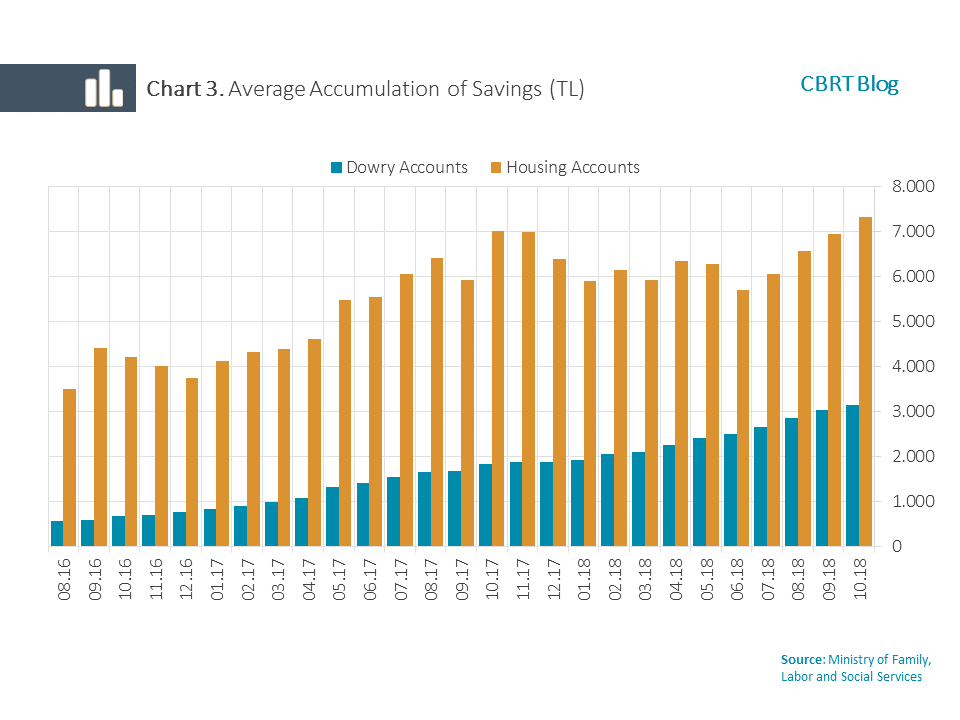 Participation in dowry and housing accounts which receive a significant amount of state contribution for savings accumulated in a relatively short period (from 3 to 5 years) may considerably increase if the returns on these accounts other than state contributions (i.e. interest and dividends) materialize around market averages and if banks promote the advantages of these products.

The AES, which has been implemented in a gradual and compulsory manner since early 2017 on a workplace basis to cover employees younger than 46 years of age, contributes to the private pension system (PPS). The AES practice has pushed the amount of funds and the number of certificates upwards.

With the transition to AES, the total amount of PPS contributions paid by participants rose by 41 percent to 62 billion TL in December 2018 from 44 billion TL at end-2016. During the same period, the amount of funds composed of returns other than participants’ and state contributions surged by 28 billion TL (52%) to 81 billion TL (Chart 4). Boosted by the compulsory characteristics of AES, the number of certificates has significantly increased since 2017. Although this increase has been somewhat contained by the retirement of 25,000 participants from the PPS and other opt-outs in 2018, participation in the system is still at high levels. 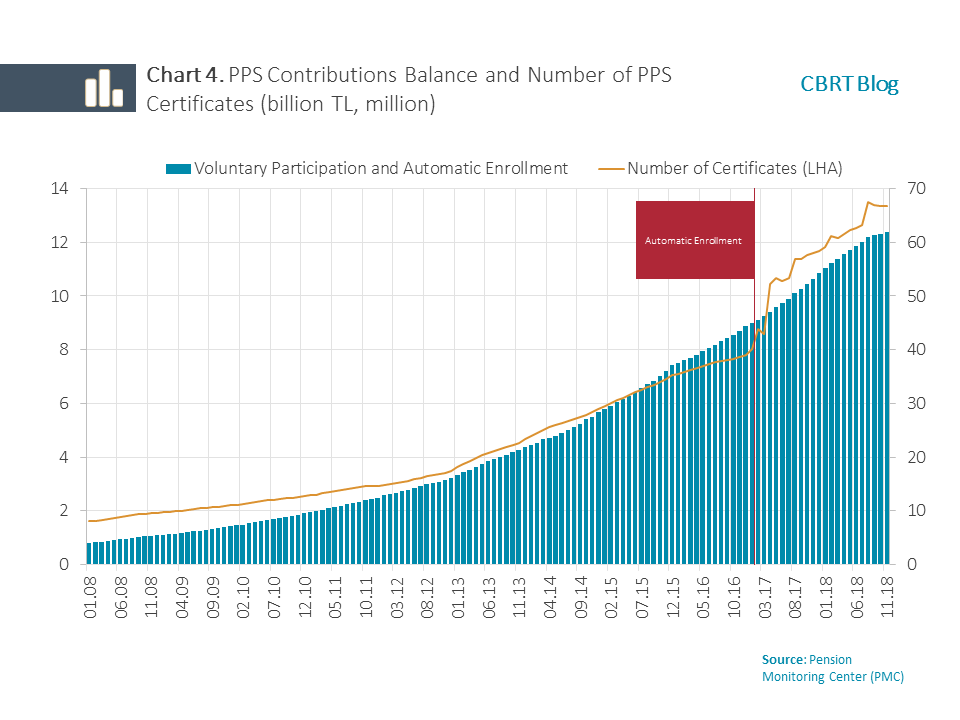 The AES, which is also implemented in advanced countries such as the US, Australia, Switzerland, Italy and the UK and in emerging countries such as Malaysia, Mexico, Slovakia and Poland, enhances awareness of both the PPS scope and of saving in general. Despite the AES-driven increase since 2017, the share of private pension funds in GDP is still significantly lower in Turkey than in both advanced and peer countries (Table 2). 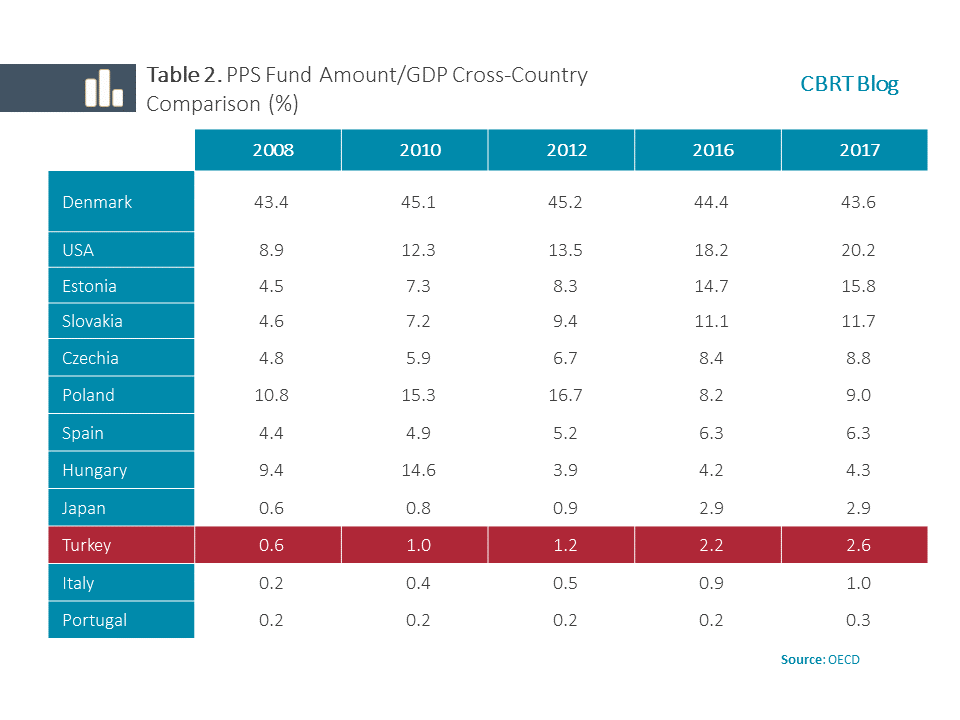 In addition to the 25-percent state contribution for savings invested in the PPS, there are other advantages increasing the attractiveness of AES such as a one-off contribution of 1,000 TL, and a 5-percent bonus on the accumulated amount paid to AES participants who prefer to use their right to retirement by purchasing a minimum 10-year annuity product.  In the medium term, AES is expected to contribute significantly to the PPS that aims to reduce the current account deficit and raise the welfare level in retirement via increasing the national level of savings and long-term fund supply. As of December 2018, the number of participants who opted to stay in AES was 5 million while the total funds accumulated in the system amounted to 4.6 billion TL. Considering Turkey’s PPS and AES experience so far and the opt-in rates, the number of participants preferring to stay in the system is projected to reach 6 to 6.5 million, including the newcomers to participate in the system in January 2019 (CBRT, 2018). As included in the Medium-Term Program for 2019-2021 (New Economy Program), restructuring the AES practice and thus making it more sustainable should be considered as a factor that would support the system.

To bring the savings that are kept outside the financial system into the economy and expand the investor base by diversifying investment instruments, gold bonds and gold-backed lease certificates have been issued with an annual return rate of 2.4 percent and an income tax withholding rate of 0 percent on these returns since the final quarter of 2017. These bonds and certificates allow for gold to be under the state guarantee, to be cashed in any time regardless of the maturity date, to receive additional return on the maturity date, and to be returned physically.

In the first round of issues covering the 2 October-27 October 2017 period, 1.4 tons and 1.1 tons of gold were invested through gold-backed lease certificates and gold bonds, respectively, building up a total of 2.5 tons of gold collection. In the second period between 26 March and 20 April 2018, 1.9 tons of gold were collected, while the amount of gold collection reached 2.1 tons in the third round of issues between 10 September and 26 October 2018 (Chart 5). Thus, a total of 6.5 tons of gold were collected in the first three rounds of issues, and the market value of this gold is approximately 1.3 billion TL. The fourth round of issues of gold bonds and gold-backed lease certificates started on 17 December 2018 and will last until 1 February 2019. Participation from women investors and investors between 25 and 44 years of age is found to be relatively high (Chart 6). 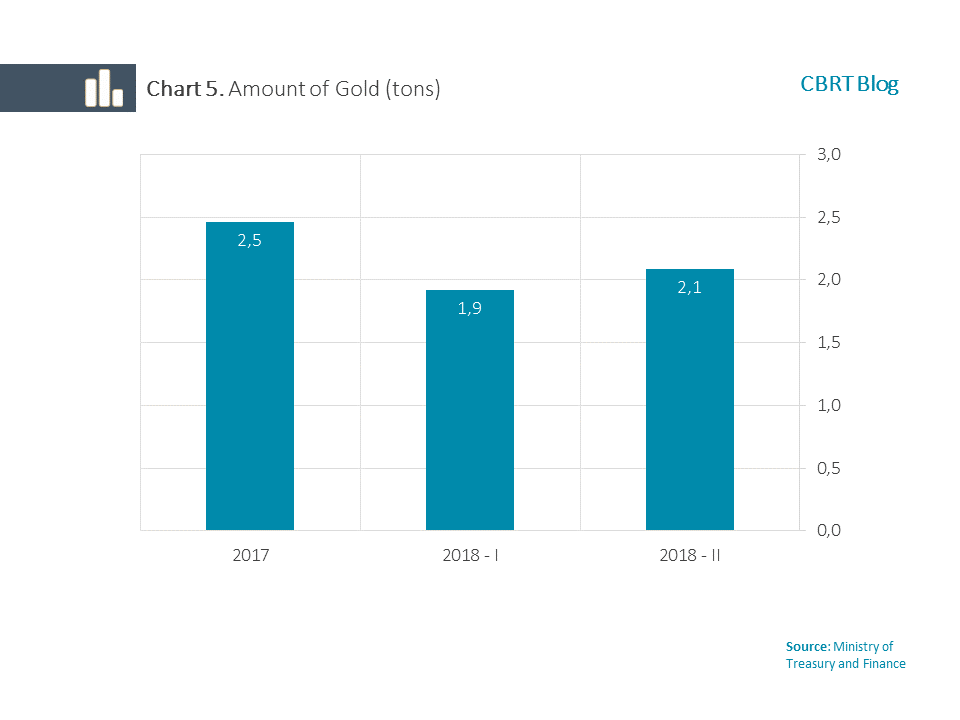 Approximately 6.1 billion TL worth of savings have been brought into the economy since the second quarter of 2016 as a result of policies towards increasing savings. Of this amount, 4.6 billion TL came from AES, 1.3 billion TL from gold-backed securities investments, and 175 million TL from housing and dowry accounts. These figures refer to investment capital only, i.e. direct investor payments excluding state contribution, interest or dividends. In addition to the returns on existing amounts and state contributions, participants' monthly or quarterly payments to be added to the amounts accumulated in AES, PPS, and housing and dowry accounts are expected to further increase these savings.

1  Persons who used to be a citizen of the Republic of Turkey but voluntarily ceased to be so by the approval of the Ministry of Interior can also open dowry accounts.