The indicator to be employed to set the buffer ratio should measure the sectoral stress accurately, be applicable at an international scale, and be simple, clear and rule-based, as those qualities are directly connected to the effectiveness and credibility of the CCyB.

Zeynep Özge Yetkin is a Director at the CBRT.

Following the global financial crisis, the Basel III capital regulations were developed in order to increase the resilience of the banking sector. At the same time, beyond the conventional capital adequacy approach, a tool was designed with a macroprudential perspective; Countercyclical Capital Buffer (CCyB).

Minimum capital adequacy ratios and the capital conservation buffer protect the sector against potential exposures. Designed from a broad macroprudential perspective, the CCyB, on the other hand, functions as an additional buffer in addition to the existing minimum capital requirement to hedge against cyclical risks. Through the continuation of the loan intermediation activity of the banking sector under financial stress following any excess credit growth in the economy, and providing resources to the real economy in particular, the CCyB aims at preventing additional tightening in credit conditions. In other words, the CCyB ratio is raised in periods of economic growth, and eased in periods of contraction.

According to Basel III standards, banks are obliged to maintain 4.5% of minimum common equity tier 1 (CET1) capital and a capital conservation buffer of 2.5% of risk-weighted assets in all conditions to meet the minimum capital requirement.  According to the CCyB design, compiled as a guidance by the Basel Committee (Basel Committee on Banking Supervision), implementation of the CCyB is left to the discretion of local authorities. Therefore, the CCyB can be defined as a dynamic macroprudential tool. The Basel Committee recommends setting of a ratio made up of the CET1 capital component of between 0% and 2.5% of the risk-weighted assets for the CCyB. However, national authorities can also set a ratio above these figures if they deem necessary. Supervisory authorities are recommended to make an official announcement regarding an increase in CCyB at least 12 months prior to the enforcement of the CCyB to allow banks to meet any additional capital requirement. On the other side, any reduction in the CCyB ratio can be enforced immediately to prevent any impact on the credit supply or gradually as preferred by the national authority. Thus, the released capital can be employed to cover the losses or prevent any contraction in asset growth.

While advising use of the credit/GDP gap as reference variable in setting the CCyB, the Basel Committee recommends employing additional indicators such as asset prices, macroeconomic conditions, balance sheet indicators and funding rate spreads as well as supervisory judgement.1

Members of the Basel Committee have to provide any changes they introduce to the CCyB for publication on the website of the Committee.2

After the Basel Committee published the CCyB guidance, along with Turkey, countries such as Italy and Spain set the CCyB rate as 0%, while Hong Kong, Sweden and Norway implemented non-zero CCyB rates due to various reasons like excessive growth in housing loans and high housing prices in particular (Table 1). 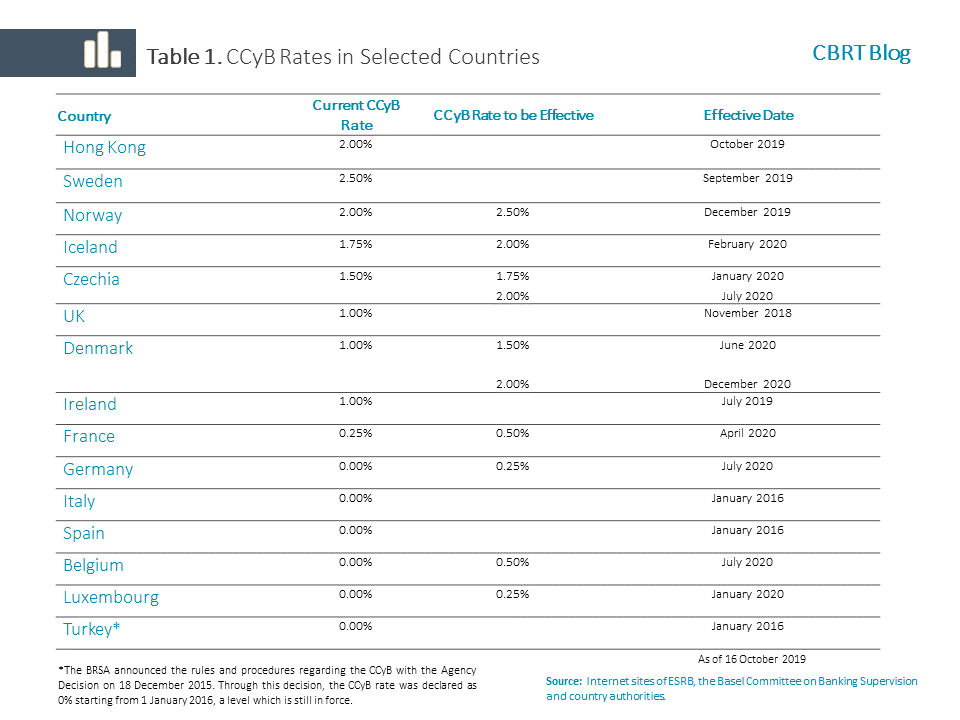 In addition to the credit/GDP gap indicator recommended by the Basel Committee, because of high housing prices, the Hong Kong Monetary Authority (HKMA) sets the CCyB rate also by employing the housing price/rent gap indicator obtained by comparing the housing prices to rent ratio with the long-term trend. With the announcement of 27 January 2015, the HKMA started to implement the CCyB rate as 0.625% effective from the start of 2016 as the credit/GDP gap was above 30%, and the housing prices/rent gap was above 14%. However, this ratio was increased gradually every year to 2.5%, the highest level recommended in the CCyB guidance.  With the announcement on 14 October 2019 that economic activity had deteriorated since June 2019, the HKMA reduced CCyB rate to 2% to enhance the support from banks to the economy.

Taking account of the possible effects of high credit growth on the financial system as well as high housing prices and household indebtedness, Sweden raised the CCyB rate gradually to reach 2.5% on 19 September 2019.

In December 2013, Norway announced that CCyB would be implemented as 1% starting from June 2015. Then, the CCyB was raised two more times owing to the persisting increases in household indebtedness and housing prices. The CCyB rate has been 2% since December 2017. The ratio will be raised to 2.5 % on 31 December 2019.

Germany, Belgium and Luxembourg will start to implement positive CCyB ratios in 2020 for the first time.

Differing from other examples, the UK aims at raising the CCyB gradually and keeping it at 1% irrespective of possible risks. The UK announced the CCyB as 0.5% in March 2016 for the first time, and reduced it to 0% following the EU referendum in June 2016, and enforced it as 1% as of November 2018.

As much as CCyB can function as a buffer for aggregate credits of the banking sector, sector-specific buffer practices may also be preferred. In this respect, Switzerland constitutes an important example. Following the movements in the real estate market, the Swiss authorities phased in buffer practices for capital requirements for mortgage borrowings in February 2013 and implemented a sectoral CCyB rate as 1%. This ratio was raised to 2% in January 2014. On the other hand, the Basel III CCyB is implemented as 0%.3 Findings obtained from the studies relating to the efficiency of the practices in Switzerland indicate that the rate of credit refusal by banks remained intact. However, higher interest rates were requested and loans extended by banks specializing in mortgage loans fell by 0.19 points on an annual basis, while the total effect remained relatively small (BCBS, 2018).

Different indicators used to calculate the CCyB make it a macroprudential tool to be employed to stay cautious against possible crises by accumulating the required capital for banking sector. Meanwhile, in addition to determining the indicators to employ in calculating the CCyB, communication of the decisions regarding the start and termination of the CCyB rate are also important. In fact, a decision to terminate the buffer practice depends on the occurrence of a stress period in the banking sector. Therefore, the indicator to be employed to set the buffer ratio should measure the sectoral stress accurately, be applicable at an international scale, and be simple, clear and rule-based, as those qualities are directly connected to the effectiveness and credibility of the CCyB.

Given the above-mentioned practices, as well as considering that the number of countries using the non-zero CCyB as an active macroprudential tool is limited, that these countries have only just started this practice and experience on decisions to reduce the CCyB are only few, time is needed to evaluate the effects of the CCyB practices. Nonetheless, we consider that CCyB can be employed as a macroprudential tool to enhance financial stability in the upcoming periods in our country as well.

Basel Committee on Banking Supervision (BCBS). 2018. “Towards a sectoral application of the countercyclical capital buffer: A literature review”.

Zeynep Özge Yetkin is a Director at the CBRT.