This blog post evaluates the results of the Cash Usage Habits Survey conducted by the Central Bank of the Republic of Turkey in September-October 2020 to understand the cash usage habits in our country and to examine the importance of cash in payment methods.

Saygın Çevik is a Director at the CBRT.

Aybüke Töre Altunel is a Central Bank Assistant Specialist at the CBRT.

The authority to print and issue banknotes obliges central banks to secure smooth completion of the cash cycle in their countries as well as prompt and problem-free functioning of the system. Therefore, central banks closely monitor cash usage. Through various surveys, central banks examine consumers’ cash holding and usage habits, their choice of payment instruments as well as the reasons behind those choices. This is the context in which the Central Bank of the Republic of Turkey (CBRT) conducted a Cash Usage Habits Survey in September-October 2020 to understand cash usage habits as well as the importance of cash in payment methods.

To represent the overall Turkish population, the survey covered 1,200 women and 1,200 men of an age range from 16 to 65, from households in the selected provinces of 26 sub-regions. An analysis of the demographic characteristics of the participants reveals that the 25-39 age group stands out with a share of 33.9%, while the average age of all participants was 38.9 years1 (Chart 1). Of the participants, 54.3% are wage earners, 47.4% are from the third income group2, 46.1% have low education3 and 56.2% have low financial literacy4. 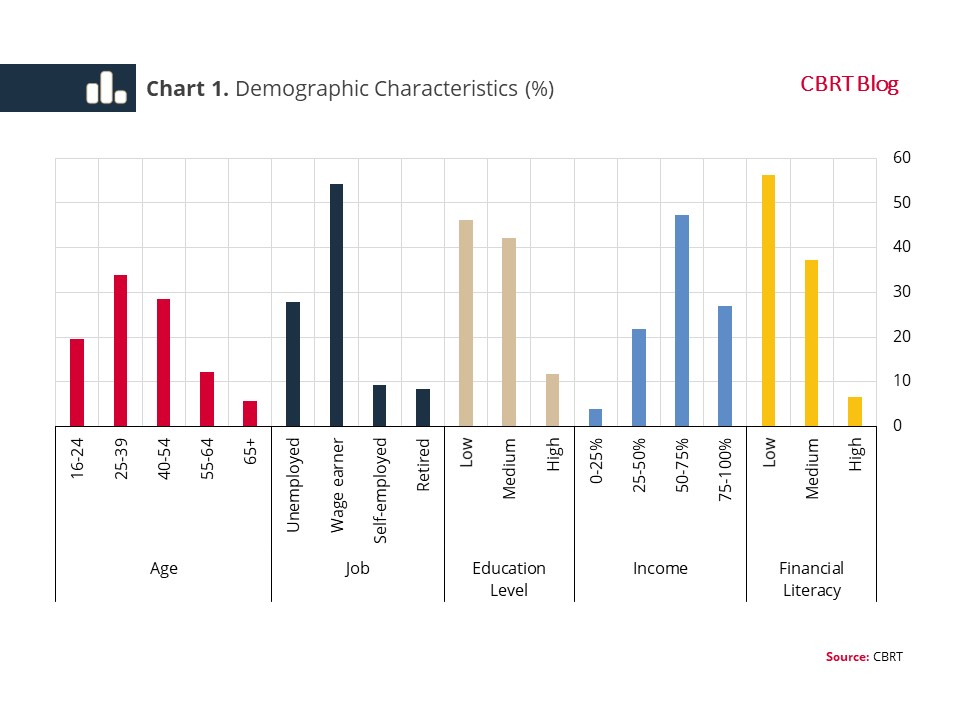 According to the survey, 32.3% receive their entire income in cash, and 30.3% through their bank accounts (Chart 2). The ratio of those who receive all or most of their income in cash is 55.1%. As the education level increases, the ratio of in-cash remuneration decreases (Chart 3). 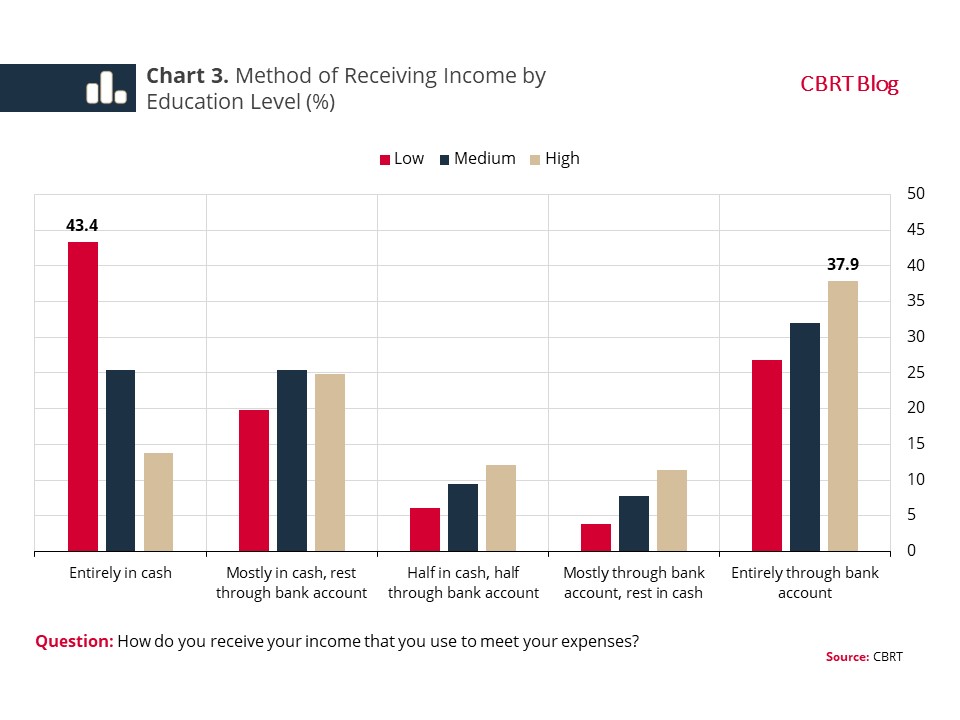 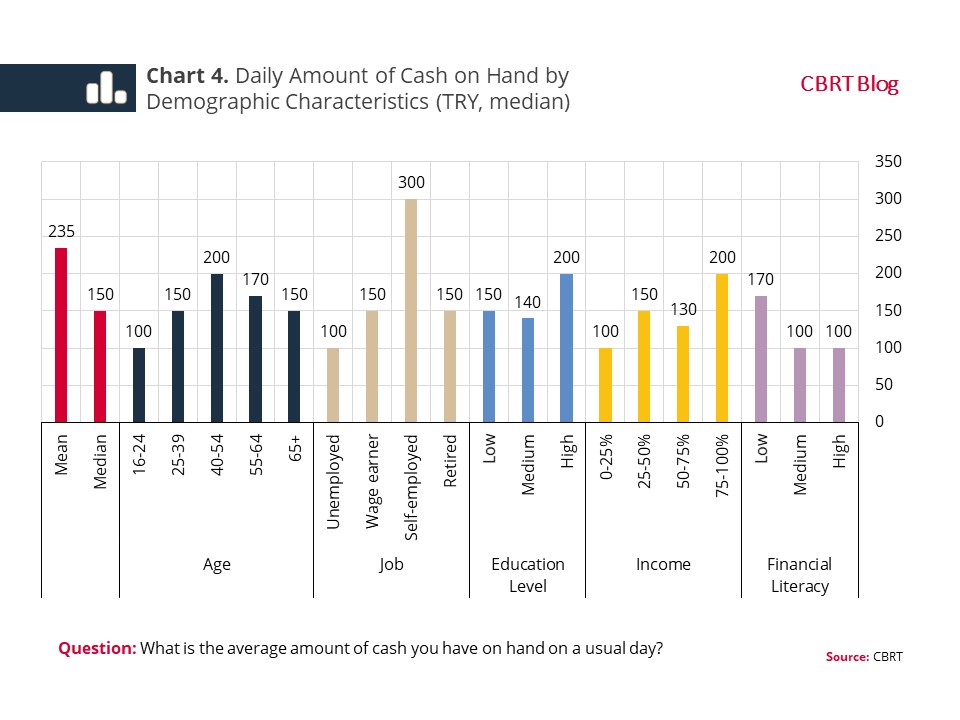 The results show that the median amount of cash withdrawn at once from an ATM or a bank is TRY 500, as against an average amount of TRY 963 (Chart 5). This amount is higher for the retired, the 55-64 age group, and those in the highest income group and with high financial literacy. 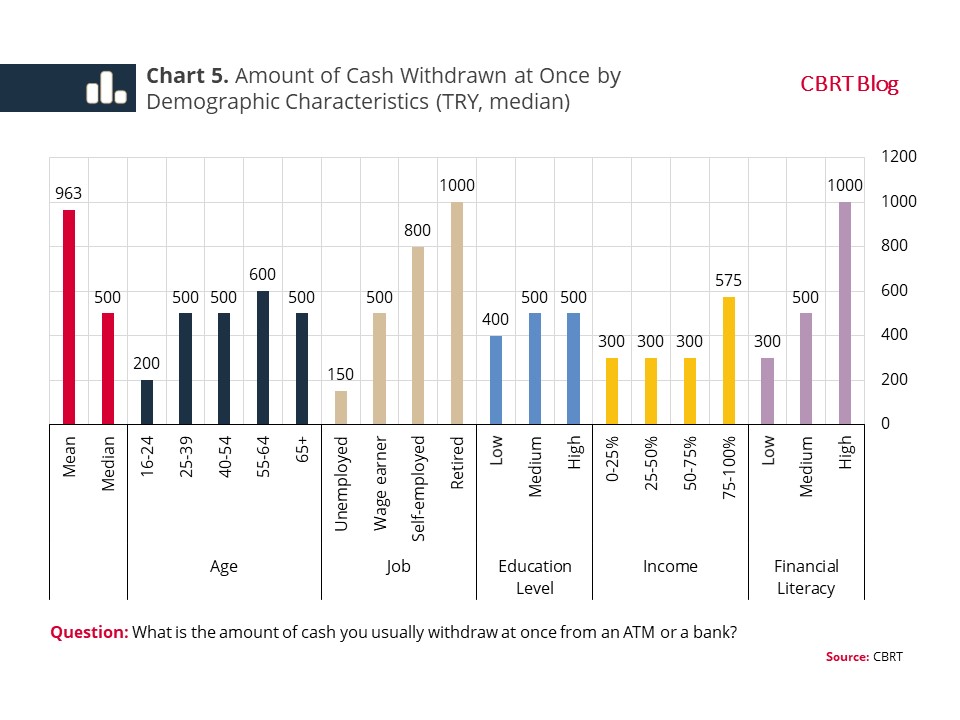 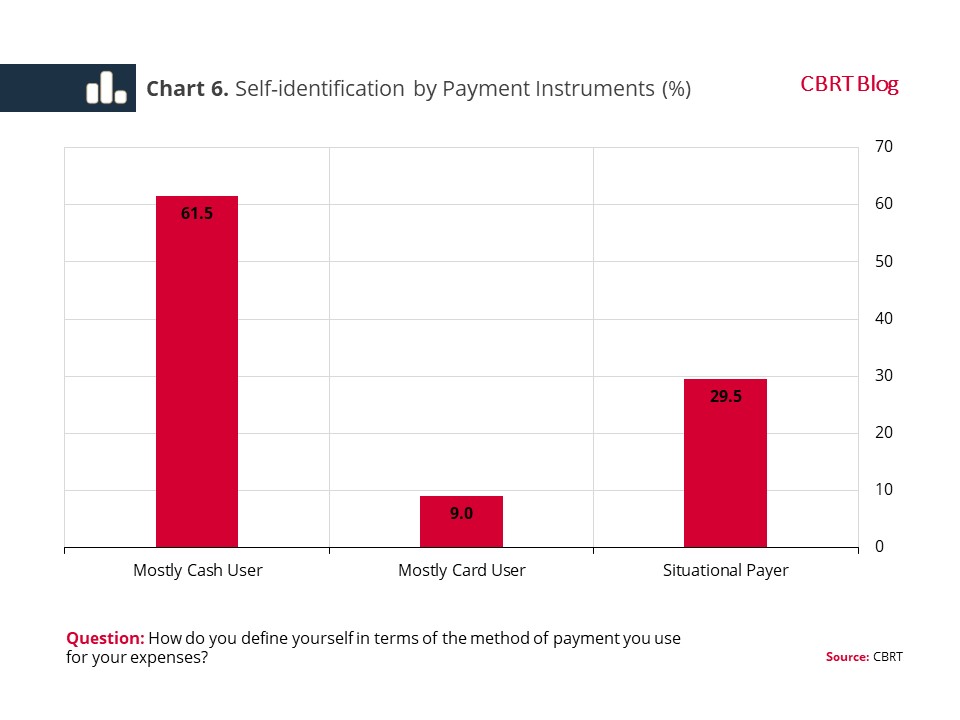 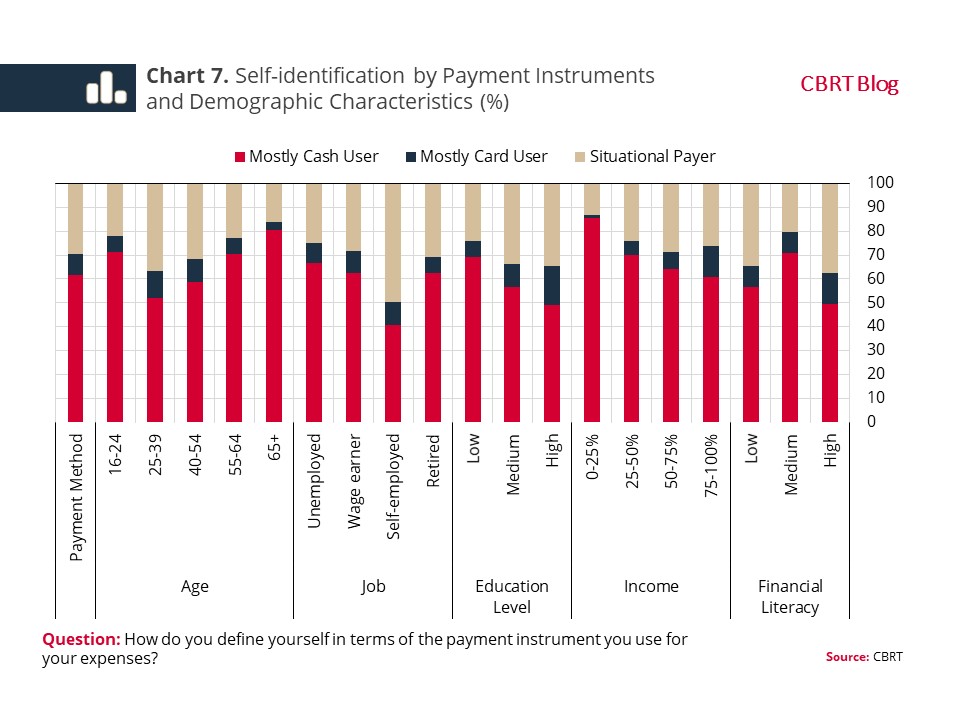 Financial inclusion and informality seem to have an effect on self-identification by payment instruments. Of the participants, 18.3% do not have a deposit account in any bank (Chart 8). Of those who are actively working, 19.1% are not registered with any social security institution (Chart 9). Self-identification as “mostly cash user” is much more common among non-deposit holders and uninsured participants (Chart 10 and Chart 11). 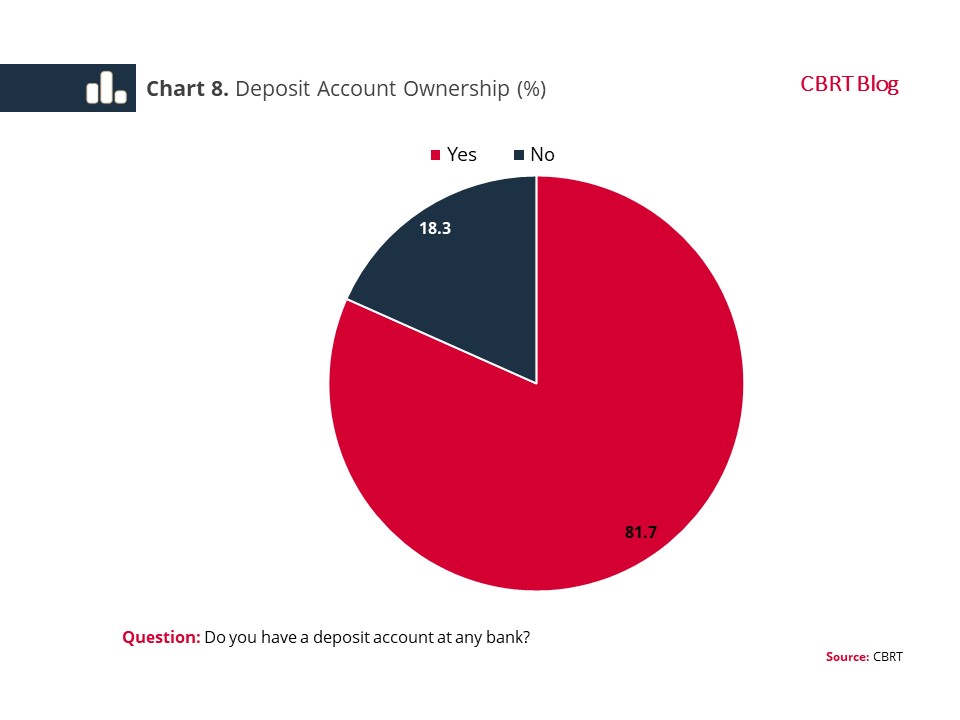 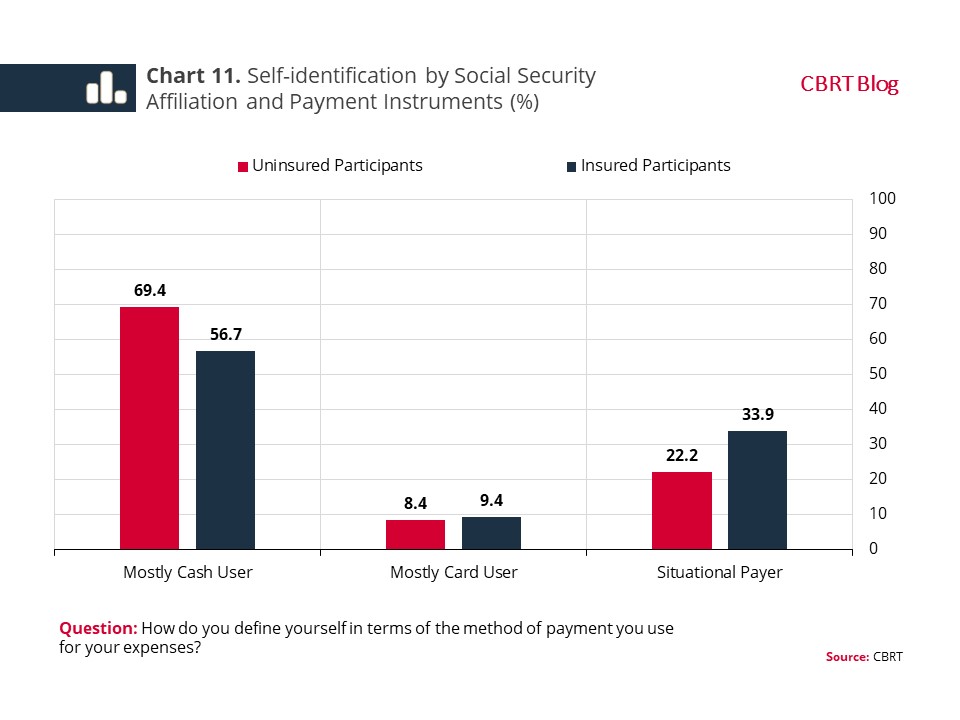 Although 61.4% of the individuals indicated that they were using cash as much as they did a year ago, the number of those reporting an increase in their cash usage compared to a year ago exceeded those who reported a decrease (Chart 12). Likewise, the proportion of those who indicated “increased usage of cash in the year ahead” is higher than those that indicated decreased usage (Chart 13). This is an indication of almost no decline in cash usage in the year ahead. 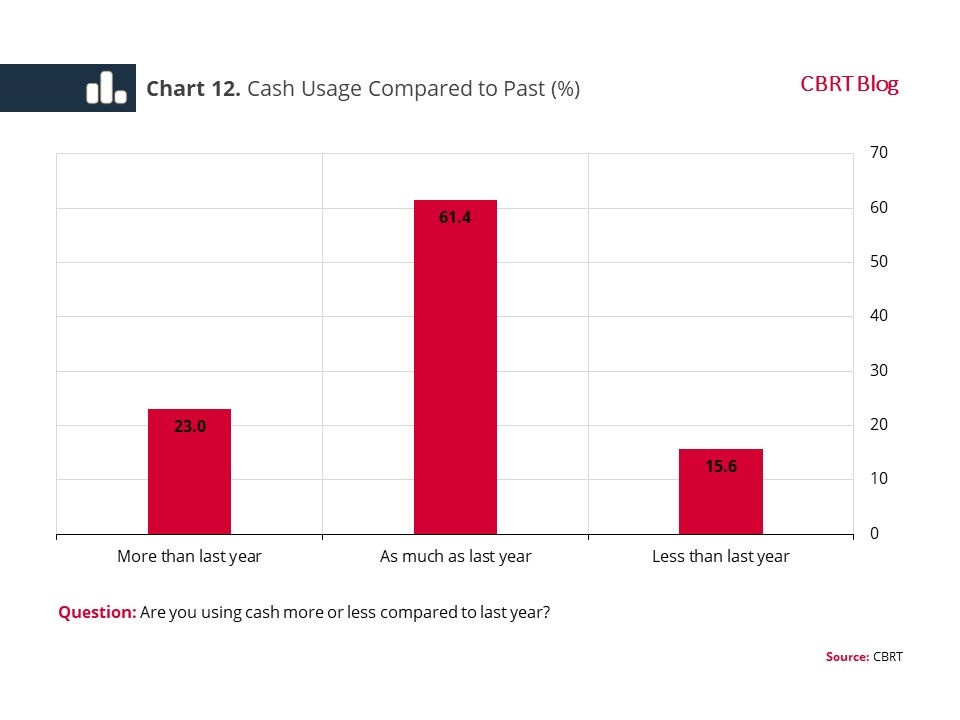 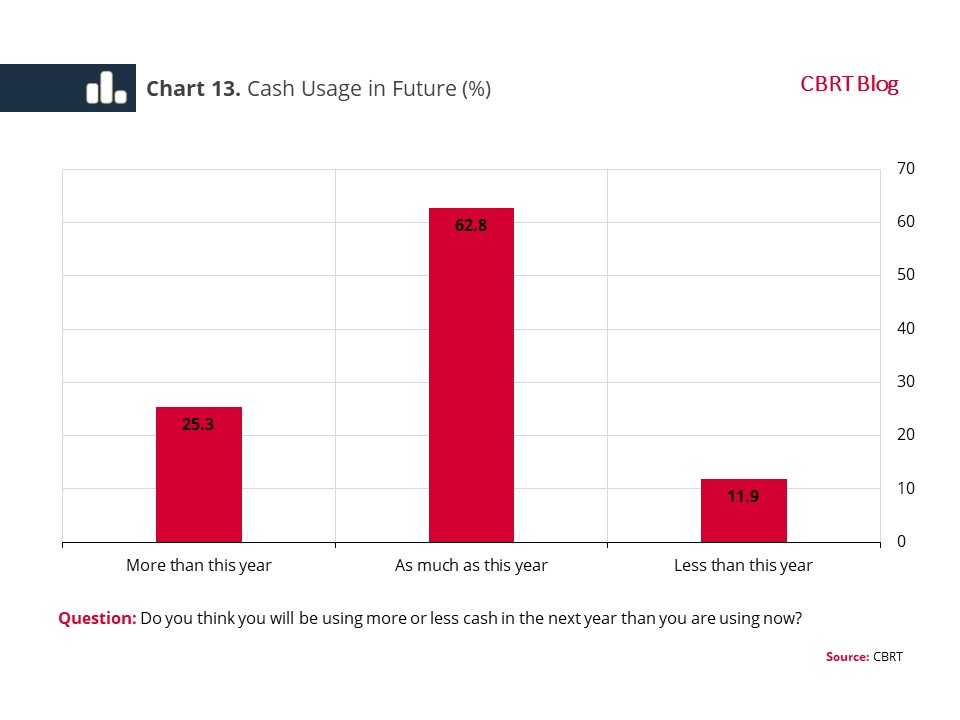 Cash usage is mainly driven by factors such as habits, preference of the seller, privacy, prevalence, ease of controlling expenditures, price advantage, low cost, ease of use, security and speed (Chart 14). 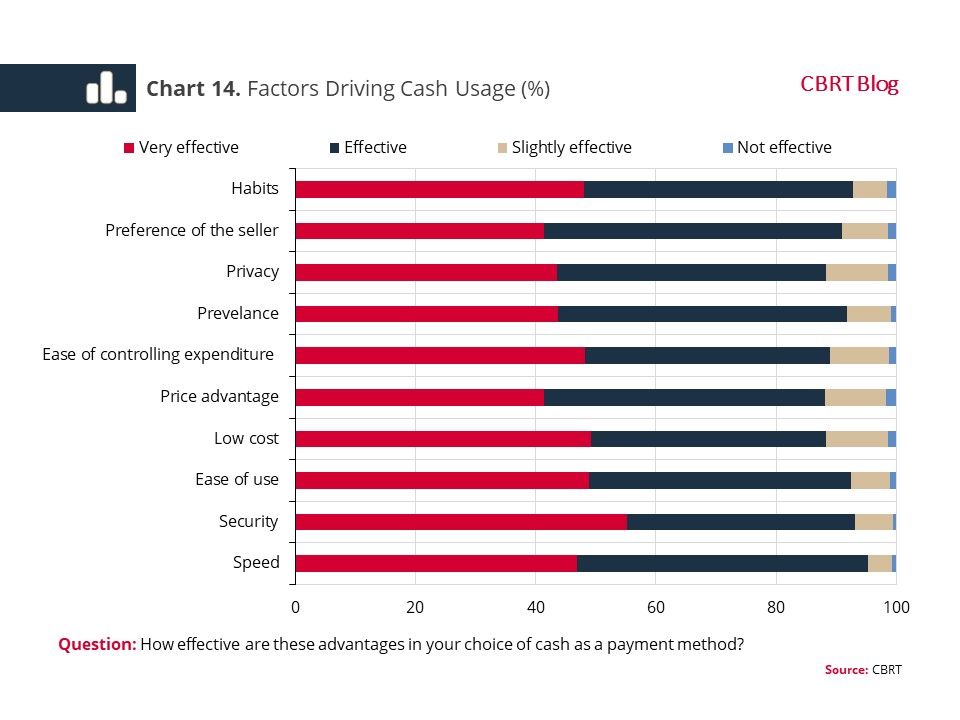 As part of the survey, 1,537 participants were given payment diary forms to record all the transactions they made over four days including a weekend. According to the results of the payment diaries, cash payments accounted for 89.5% of the total purchases at points of sale (POS) in terms of number of transactions, and 76.0% in terms of value (Chart 15). Compared with the euro area countries, Turkey is the country with the highest cash usage5 (Chart 16). 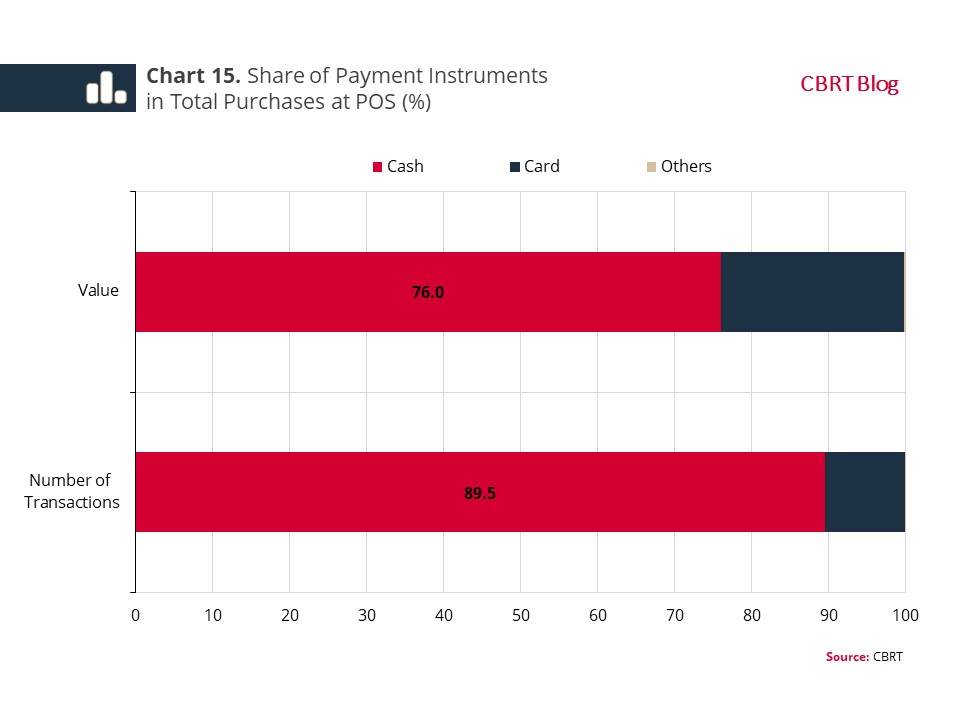 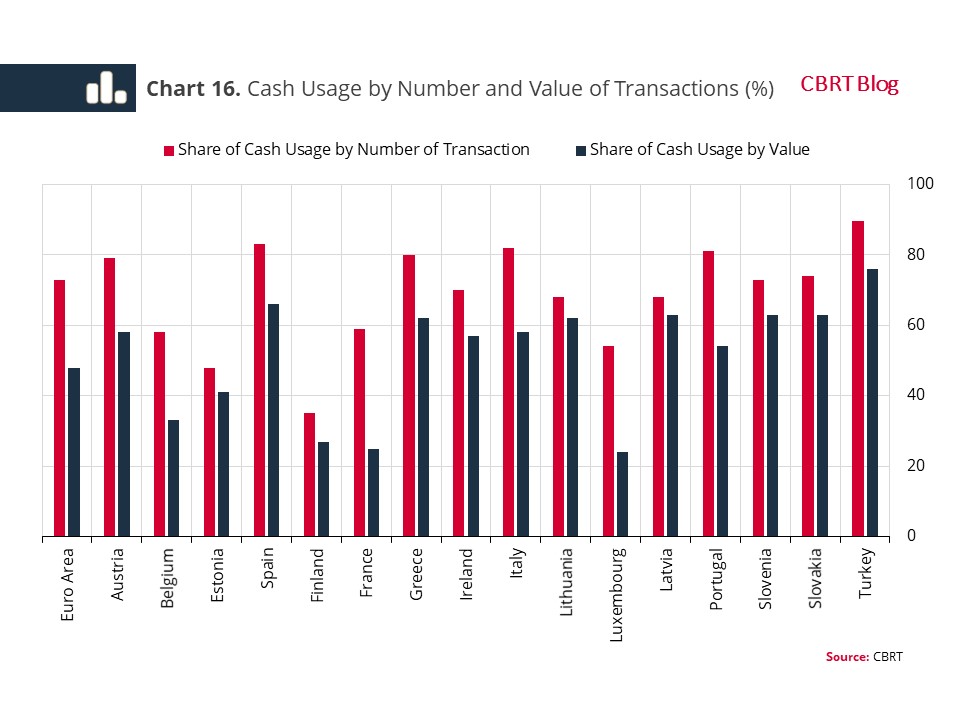 In brief, although card payments have a significant place in our daily lives, the results show that cash is much more dominant than other payment methods in Turkey. On the one hand, the importance of card payment systems in payment methods is increasing rapidly, and significant developments are taking place in mobile payment systems due to the widespread use of smart phones. On the other hand, it seems that cash usage will remain important among other payment methods in the short run since individuals identify themselves as “mostly cash user”, the share of cash payments in their expenditures is quite high, and  indicate no decrease in their propensity to use cash in the near future.

[1]  According to the 2019 data of TURKSTAT’s Address Based Population Registration System, excluding the age group under 15, the share of the over 65 age group is 11.8%. This is higher than that group’s share within survey participants, while the shares of other age groups seem to match more closely.

[2] An income-based distribution was made according to household incomes. While 455 of the participants did not specify their income, the income groups of those who were classified in 25%-groups are sequentially in line with TURKSTAT’s 2019 disposable income distribution.

[4] To measure financial literacy, participants were asked three questions on inflation, interest rate and risk. Correct answers were scored as 1, wrong answers as -1, and neutral answers (I don’t know) got 0 points. Hence, participants with a total score of 3 were classified as having high financial literacy, whereas those with a total score of 1 or 2 were classified as medium and the rest as low.

[5] According to an ECB survey in 2020, cash payments accounted for 73% of purchases in terms of number of transactions and 48% in terms of value at POS in Europe.

European Central Bank (2020), “Study on the payment attitudes of consumers in the euro area (SPACE)”, December.

Aybüke Töre Altunel is a Central Bank Assistant Specialist at the CBRT.

Saygın Çevik is a Director at the CBRT.