The NSFR, which will be effective starting from 2018, will enable comprehensive measurement of the liquidity risk by taking into account the maturity of the assets and liabilities on banks’ balance sheets.

Ayşe Karasoy is a Central Bank Assistant Specialist at the CBRT.

Emine Özgü Özen Çavuşoğlu is an Assistant Central Bank Specialist at the CBRT.

The global financial crisis once more showed the importance of liquidity for the sound functioning of the banking sector and financial markets. Before the crisis, the asset markets were robust and funding cost was low. However, the rapid deterioration in market conditions showed how quickly liquidity could dry up. Although they were able to meet the minimum capital adequacy ratios, banks came under significant stress due to liquidity problems.  Even if indicators such as loan/deposit ratio were used in measuring funding risks and monitoring liquidity positions of banks, these indicators fell short of providing an extensive risk assessment as they neglected stable funding sources other than deposits and ignored the maturity composition of assets-liabilities.

After the global financial crisis, the Basel Committee on Banking Supervision (Basel Committee) published principles for sound liquidity risk management for banks, and developed standards for minimum liquidity ratios for the first time. The first of these was the Liquidity Coverage Ratio (LCR)[1] that was intended to promote banks’ resilience against short-term liquidity shocks. The Basel Committee member states have been implementing the LCR gradually since 2015. The second standard was the Net Stable Funding Ratio (NSFR) developed against long-term liquidity risk. This analysis will evaluate banks’ funding structures with respect to the NSFR, which is calculated under certain assumptions.

The NSFR aims to limit overreliance on short-term wholesale funding by encouraging a long-term funding structure based on deposits. According to this ratio, the amount of available stable funding of a bank relative to the amount of required stable funding should be greater than 100 percent. Unlike the LCR, no gradual transition is foreseen for the NSFR. Therefore, the banks are obliged to meet this minimum ratio as of 1 January 2018. 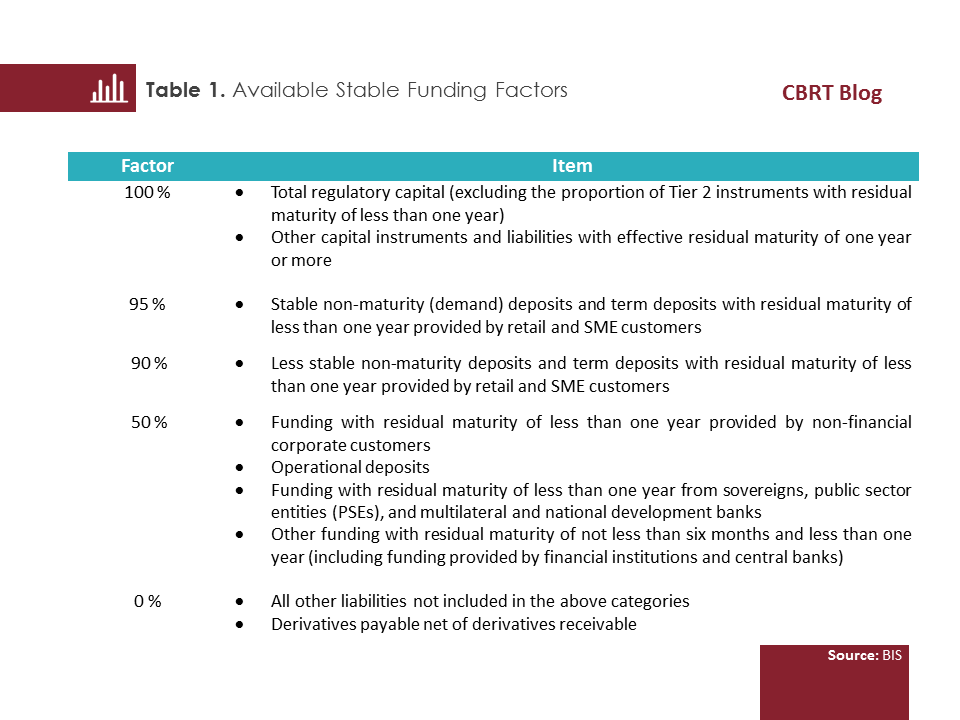 The “required amount of stable funding” is calculated by classifying assets from the least liquid to the most liquid according to their liquidity-generating capacity and multiplying them with certain required stable funding factors. In this calibration, it is assumed that banks will not roll-over part of their short-term assets and they will generate funding by encumbering liquid assets or selling them on the market. In this regard, while a required stable funding is introduced for assets with a maturity of one year or more, this requirement is less for liquid assets (Table 2-3). 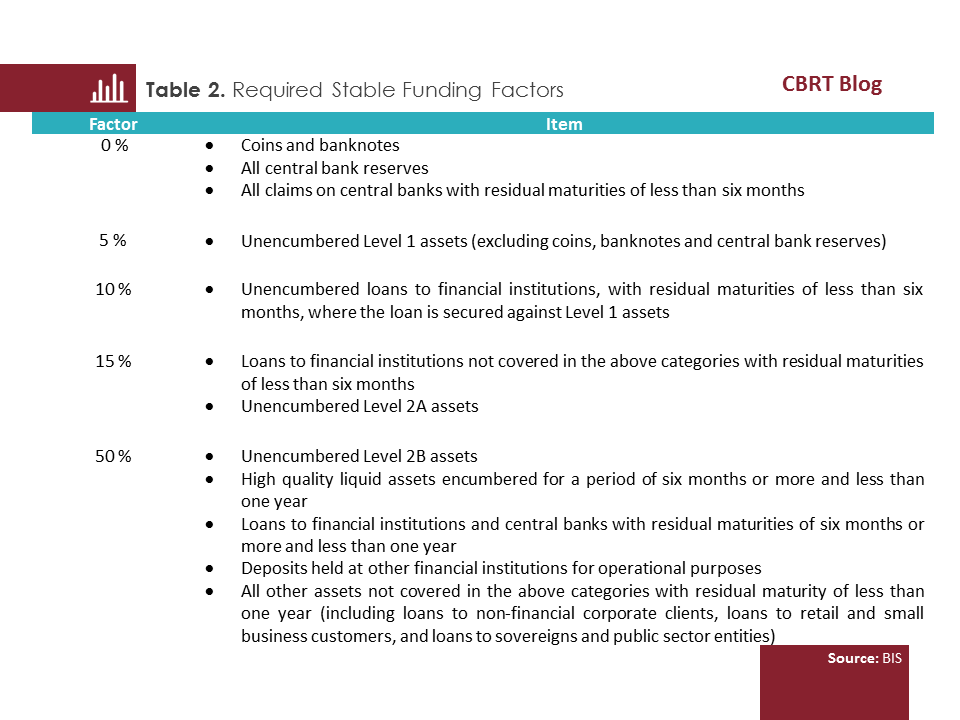 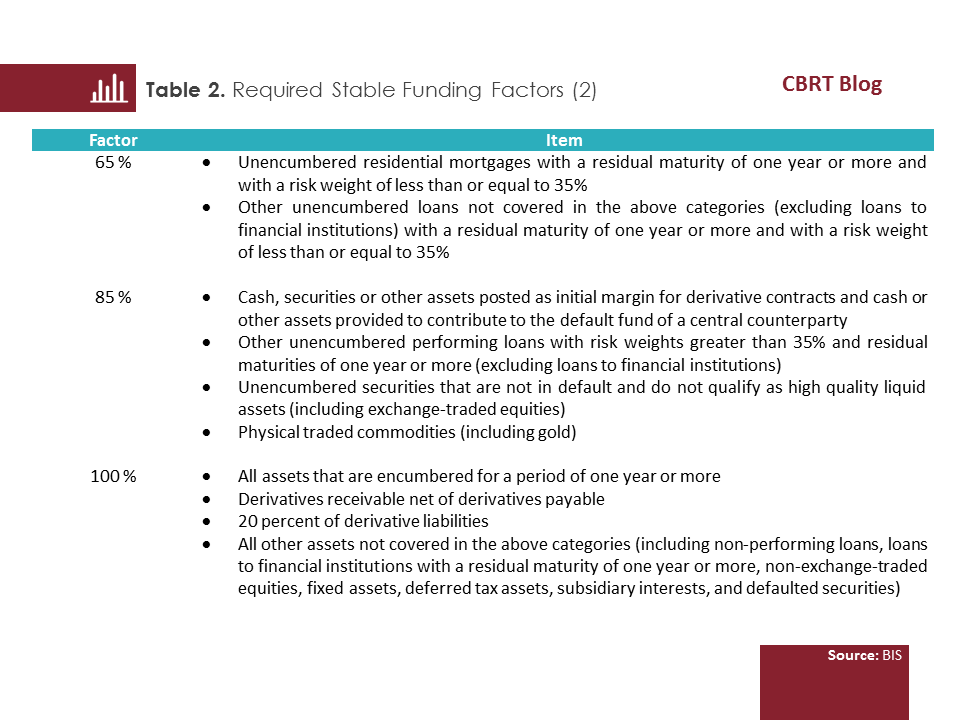 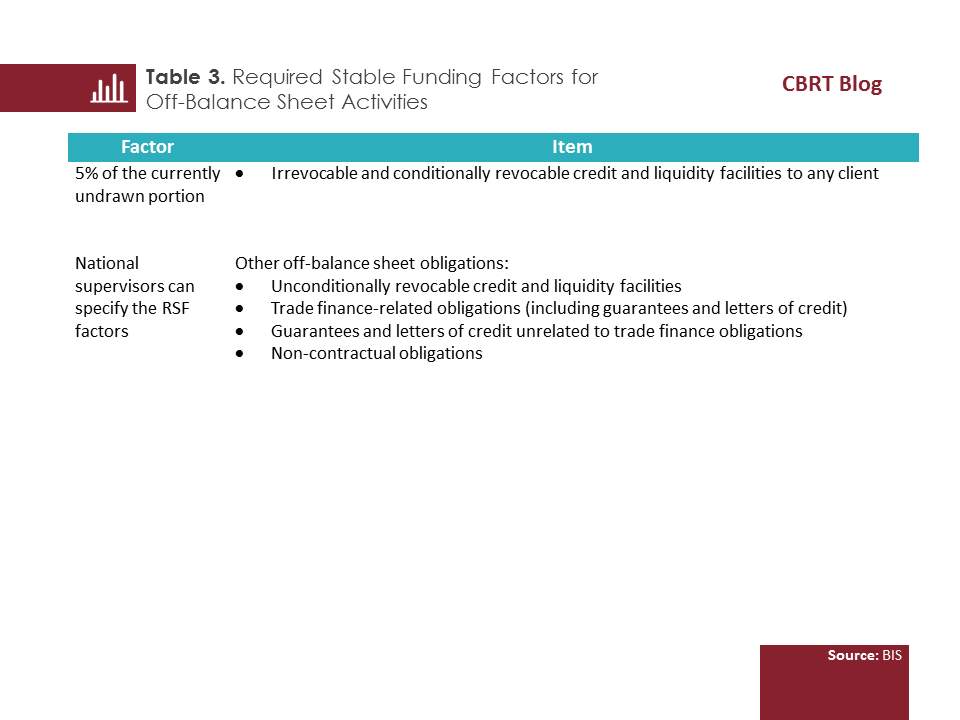 Although the NSFR reporting has not yet started in the Turkish banking sector, the sector’s NSFR can be calculated under specific assumptions. The strongest assumption made within the scope of the study is to calculate the NSFR based on original maturities.[2] In fact, all funding and asset items should be considered in view of the residual maturity in an NSFR calculation. However, the fact that the maturity of deposits that account for a significant portion of the funding is shorter than six months provides reasonable grounds for our assumption. Whereas, on the asset side, although the fact that original maturities are longer than residual maturities poses a risk of underestimating the NSFR, it supports our cautious stance.

As of December 2016, the NSFR that we calculated for the Turkish banking sector was above the 100 percent level set as the minimum ratio in the Basel standards and has been on a flat course since 2015.[3] In sum, it is possible to ascertain that banks finance their assets with stable funding sources. 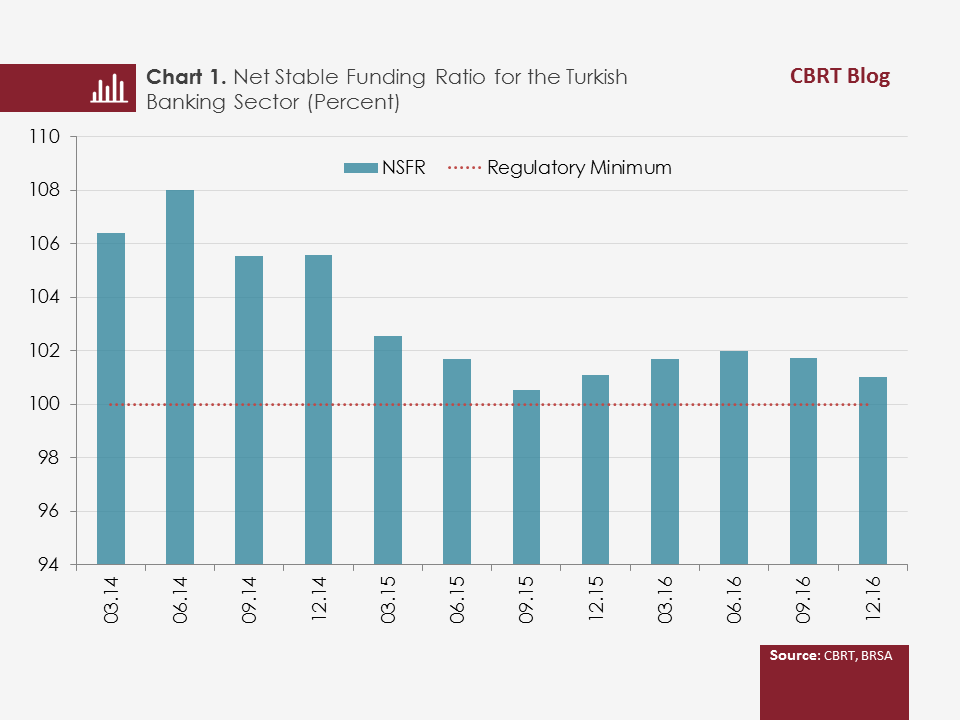 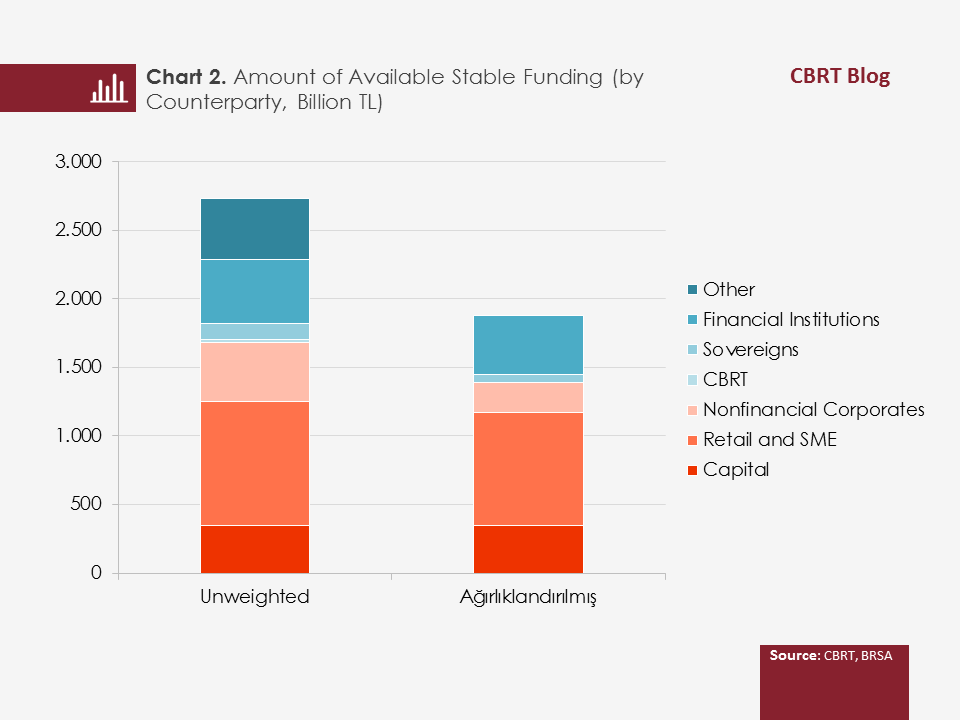 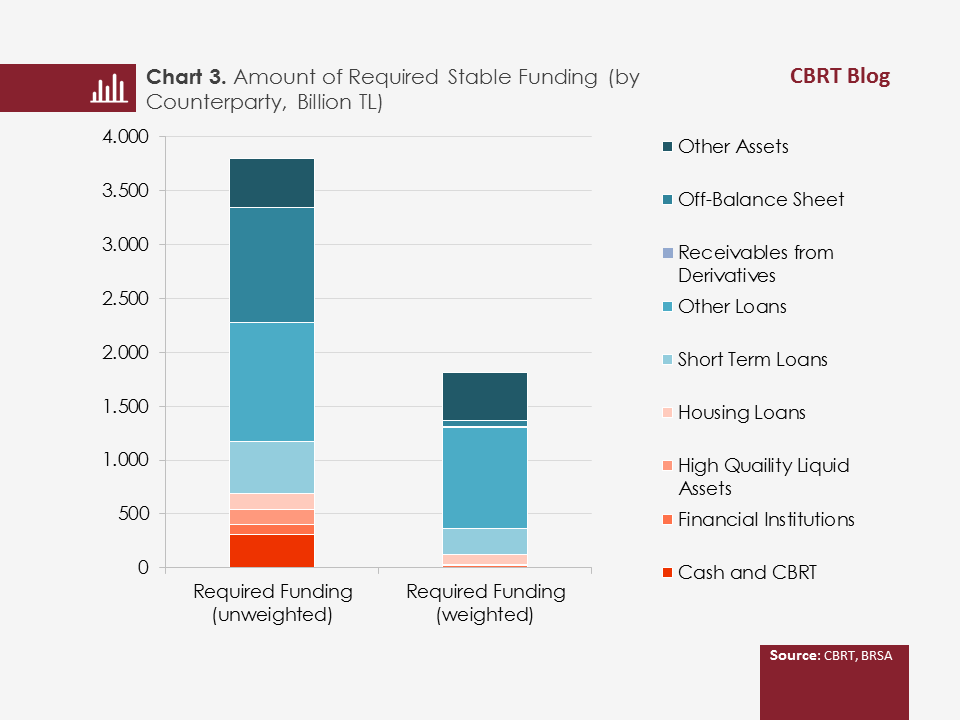 To conclude, the NSFR, which will be effective starting from 2018, will enable comprehensive measurement of the liquidity risk by taking into account the maturity of the assets and liabilities on banks’ balance sheets. From a long-term perspective, the NSFR will be supplementary to the LCR that measures the resilience against short-term liquidity shocks. In light of current measurements, we can say that the long-term liquidity positions of Turkish banks are strong. It is important for the sustainability of this outlook that banks also have the NSFR as another minimum requirement in addition to the LCR.

[1] LCR is calculated by dividing stock of high quality liquid assets to total net cash outflows over the next 30 calendar days. The minimum requirement for LCR was set at 60 percent in 2015 and it will reach 100 percent in 2019 with 10 points increase annually.

[2] In NSFR calculation, assets and liabilities are considered in view of the original maturity. Commercial deposits below TL 250 thousand are considered as SME deposits. All encumbered securities and the collateral for reverse repo receivables are deemed as “level 1” assets. The initial margin considered as 85 percent in derivative transactions are not decomposed and taken as 100 percent among other on-balance sheet items. Net receivables from derivative transactions are taken into account along with the required funding factor of 100 percent, regardless of the collaterals of transactions.

[3] The Basel Committee conducts a semiannual quantitative impact study to evaluate capital and liquidity ratios within the scope of Basel III.  These studies are based on the data of a total of 230 reporting banks. Three banks from Turkey also contribute to this reporting. The weighted average NSFRs for group-1 and group-2 banks by June 2016 were 114 percent and 115 percent, respectively. Banks that contributed to reporting from Turkey meets the minimum NSFR as of this date and their weighted average NSFR at 114.6 percent remains above the average of group-1 banks in which they are listed.

Emine Özgü Özen Çavuşoğlu is an Assistant Central Bank Specialist at the CBRT.

Ayşe Karasoy is a Central Bank Assistant Specialist at the CBRT.