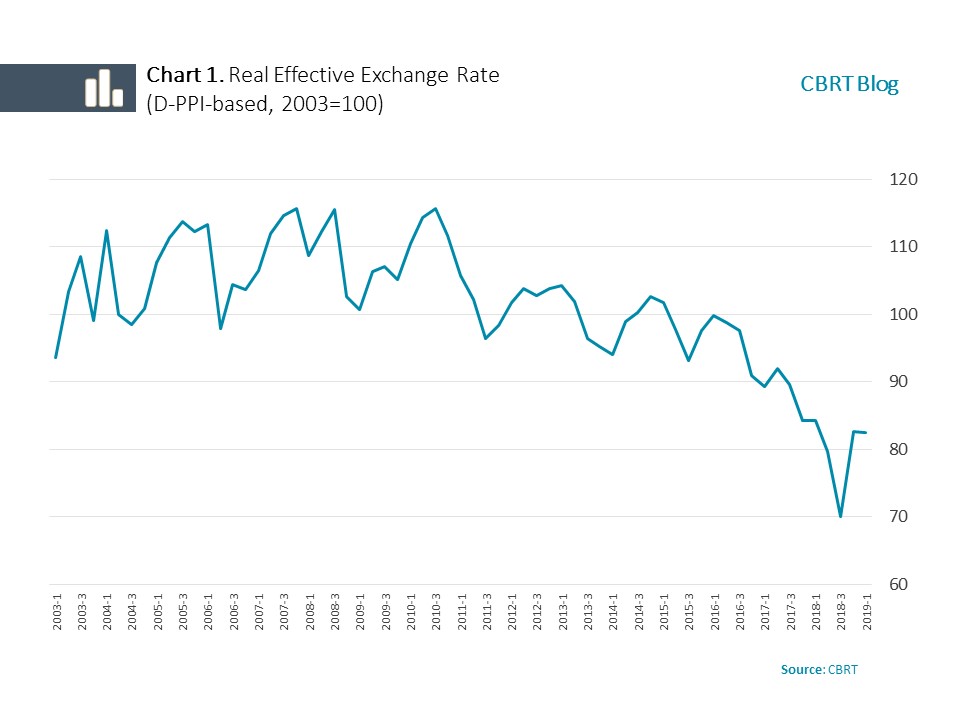 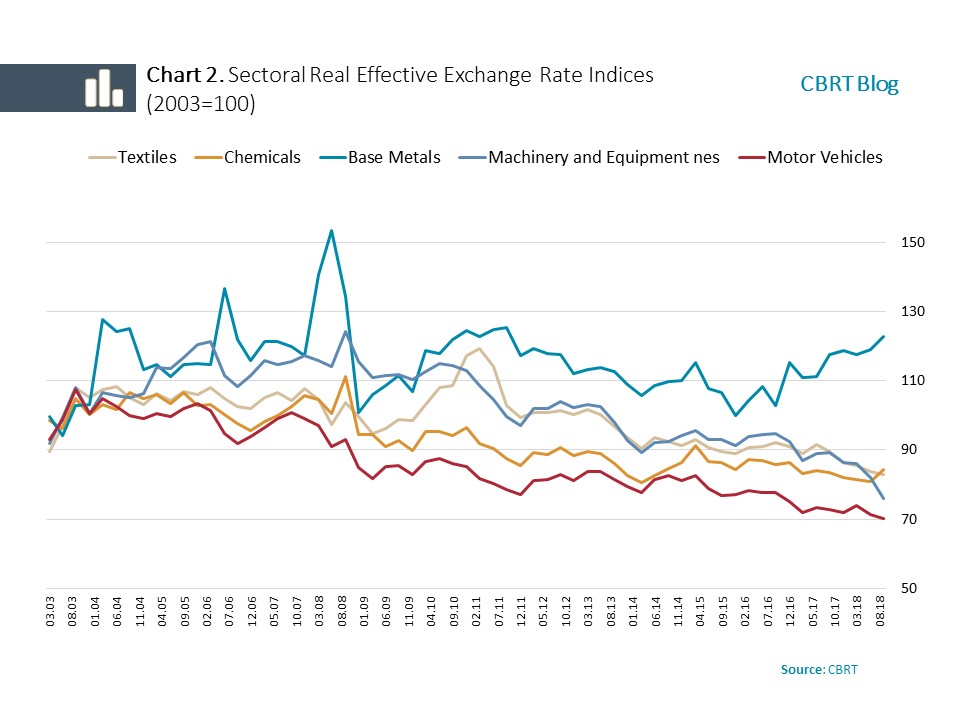 First, we focus on the relation between the sectoral real effective exchange rate and the comparative advantage variables directly calculated based on export performance. In the literature, export-based comparative advantage measures have been derived since the mid-1900s (Balassa, 1965). However, the majority of these measures fall short of measuring the “productive capacity” which is theoretically defined as a comparative advantage in cases where costs of bilateral trade between countries are asymmetric (French, 2018). Yet, via regression-based methods developed recently, it is possible to calculate theoretically consistent comparative advantages using details of data concerning product-source country-target country (Costinot et al., 2011).[3] 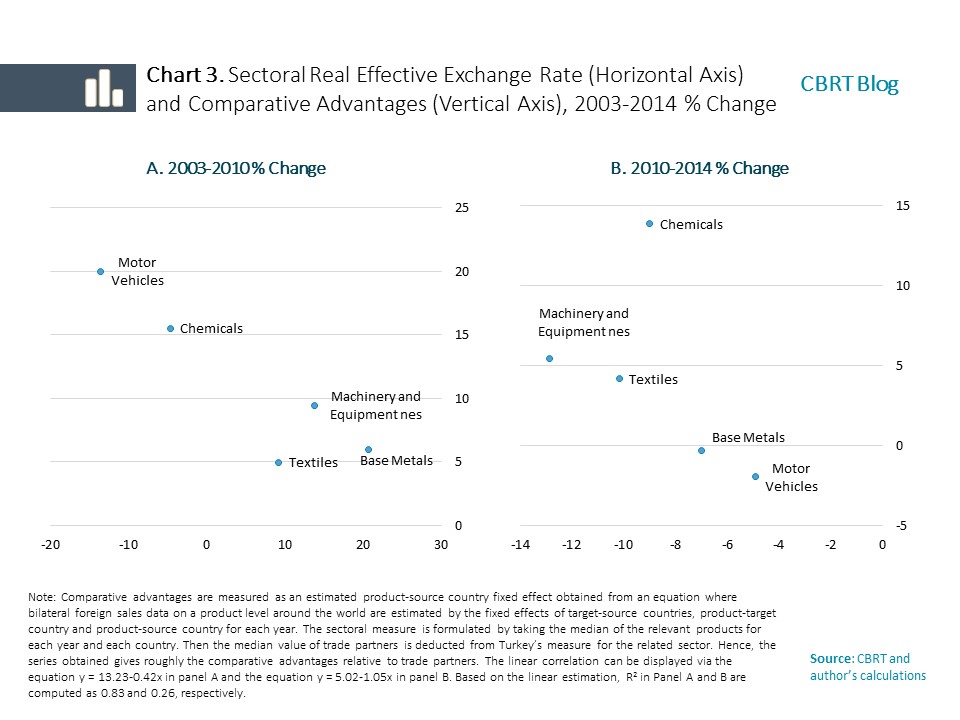 In the long term, the foreign trade-based measures roughly confirm the interpretation of sectoral real effective exchange rate in relation to competitive advantages. To be able to make higher-frequency inferences that are based on a larger number of observation points and that refer to a more recent period, quarterly productivity indicators published by the Ministry of Industry and Technology can be used. We employ a simple regression model for an estimation of sectoral real effective exchange rate series by sectoral productivity indices. Our observations regarding the role of productivity in the divergence of series since 2009 are summarized in Chart 4.[4] 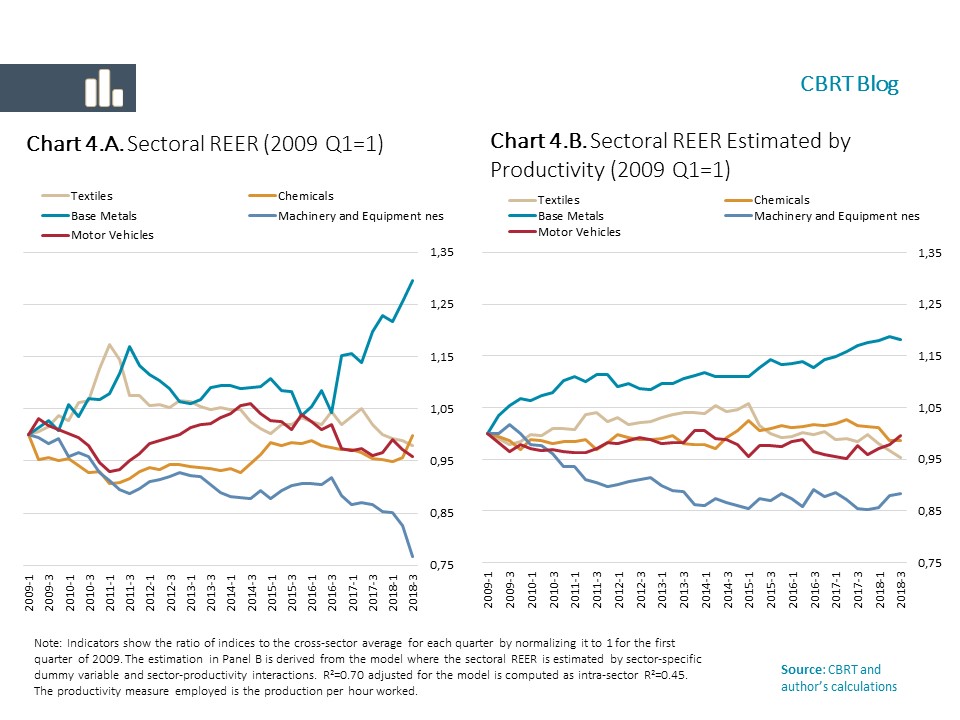 Another point revealed by this exercise is that although productivity is the main driver of medium-term real effective exchange rate developments, factors other than productivity are also influential in short-term sectoral divergences at times. The base metal sector constitutes a recent example in this respect. In this sector, the deviation from the average has increased by 24% since the third quarter of 2016, and only 5 points of this deviation can be explained with the medium-term productivity relation. As a matter of fact, producer prices in the base metal industry sharply increased in this period compared to general producer prices. Given that this period also coincided with the easing of price competition pressures by China, competitive disadvantages that the exporters effectively suffered from may have remained below the level implied by the index in this period.[6]

[1] Theoretically, relative prices of the sectors with increased relative productivity can be expected to decrease in the short term and create a competitive advantage in this way (French, 2018). This blog post does not include a method that defines the causality between real exchange rates and productivity, and thus, the inferences are interpreted based on the common movement between the two. For an analysis that summarizes the conceptual framework of the relation between the real exchange rate and productivity and that provides an economic literature review, see Özbilgin (2015).

[3] Comparative advantages have been estimated by the equation

is the logarithm of country i’s exports of product k to country n,

is the fixed effect for the country pair of trade,

is the fixed effect for product k and country i, and

is the stochastic shock on the bilateral trade of the given product. The fixed variable of product-exporting country obtained via the annual estimation of this equation by world bilateral trade data,

offers a theoretically consistent measure of the comparative advantage of country i regarding product k (Costinot et al., 2011; French 2018).

are the real effective exchange rate and productivity index of sector k in year t, respectively,

is the indicator variable for sector k, and

is the stochastic shock on the real effective exchange rate. The REER series estimated by this model has been used in Chart 4B.
[5] The estimation yields almost the same results when the measure of productivity per worker is employed instead of the hours worked. Wages, another factor that may be related to REER changes, display relatively very close variations in the related sectors, and the estimation performance for REER changes remains low.

[6] For sectoral developments coinciding with the start of the period, see the Report of the Ferrous and Non-Ferrous Metals Assembly of Turkey (2016).

Arnaud Costinot, Dave Donaldson, and Ivana Komunjer. "What goods do countries trade? A quantitative exploration of Ricardo's ideas" The Review of economic studies 79.2 (2011): 581-608.

2016 Report of the Ferrous and Non-Ferrous Metals Assembly of Turkey (in Turkish), the Union of Chambers and Commodity Exchanges of Turkey, Publication No: 2017/300