An Overview of Misconduct Risk

Misconduct can be a severe factor of fragility for financial institutions. Misconduct that increases particularly in periods of accelerated financial innovations not only causes damage to institutions but also leads to systemic risks by triggering a confidence crisis that may spread through the whole system through the contagion effect.

I. What is misconduct risk?

Despite the ever-improving business processes, misconduct risk remains one of the significant risks threatening all sectors, in particular the financial sector. Perceptions of misconduct risk strengthened and the confidence in financial institutions dropped to historically low levels due to the global financial crisis and the consequent successive financial scandals arising from Libor, FX, and rating agency factors as well as the penalties imposed in the framework of anti-money laundering and combating the financing of terrorism (AML/CFT) efforts. Therefore, reducing misconduct risk has become one of the factors behind the need for global financial reform. Misconduct risk, in its broadest definition, refers to risks attached to the way in which a firm and its staff conduct themselves and their operations. It also includes how customers and investors are treated, violation of rules and manipulation of markets.

Among the surveys included in the report on misconduct risk in the banking sector issued by the European Systemic Risk Board in 2015[1], the survey conducted by Edelman Trust in 2014 with 33,000 people in 27 EU countries reveals that the banking and financial services sector is the least trusted sector (Chart 1). 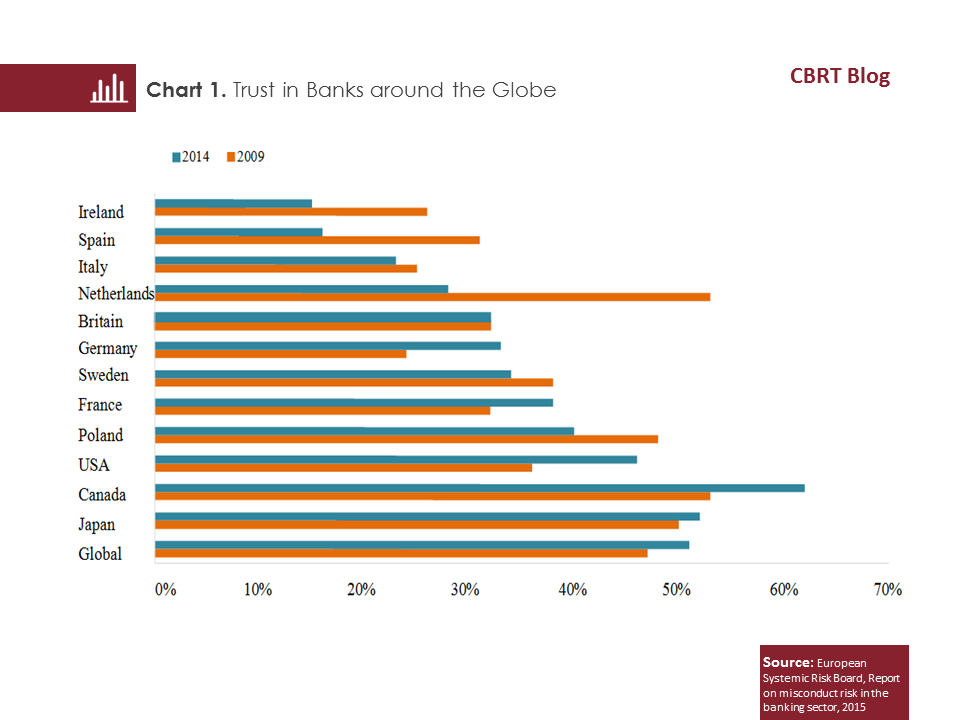 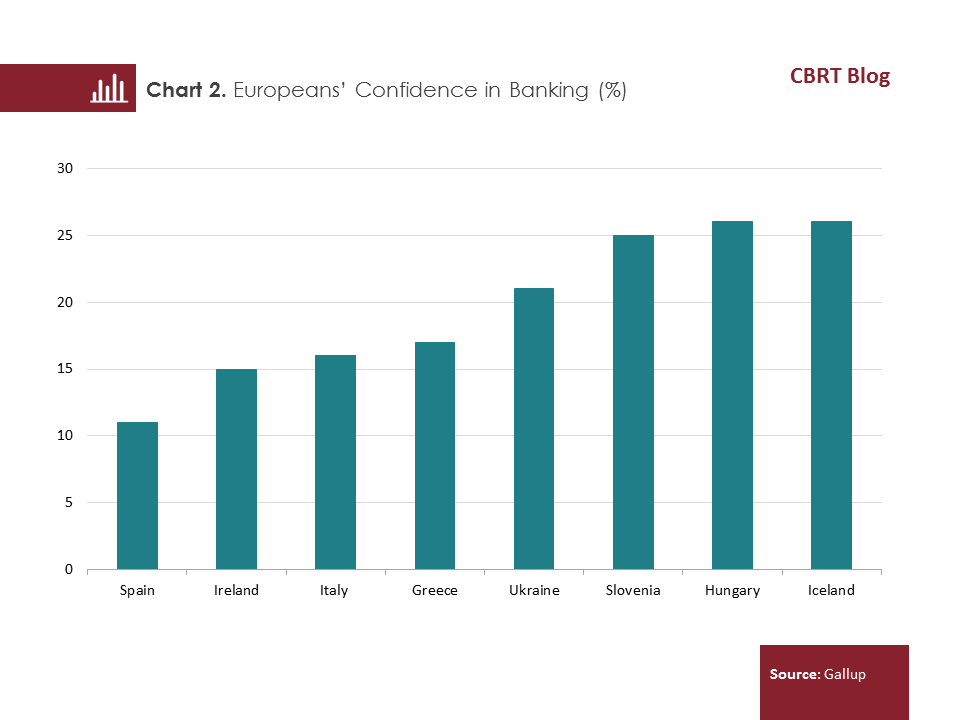 Weakened confidence in the financial system causes participants to withdraw from the system, posing a danger of reducing financial inclusion. Moreover, although there is no such empirical study yet, misconduct also has possible costs in that it can lead to tax losses and resource misallocations, and can affect other sectors interacting with the banking sector unfavorably through contagion effects.

On the other hand, financial and other sanctions applied to prevent misconduct and reduce the misconduct risk may entail systemic risks in certain cases and impose costs on users of the financial system. This is because it is mostly the large banks that are vulnerable to the misconduct risk. The Libor scandal is a significant example here. In 2012, it was unveiled that banks influential in the setting of Libor, which is the average interest rate that highly-credible banks in London apply in USD-denominated interbank lending transactions, were manipulating the interest rates for their own interests. Sixteen banks including Barclays, Bank of America, Bank of Tokyo-Mitsubishi UFJ, Citigroup, Credit Suisse, Deutsche Bank, Lloyds, HSBC, HBOS, JPMorgan, Rabobank, RBS and UBS were investigated. Following the investigations, Barclays, UBS and RBS were fined USD 2.6 billion. By 2013, 85% of misconduct-related fines had been made against 10 banks ranked in top places in the list of global systemically important banks (G-SIB), which gives a hint about the potential systemic risk. Large banks being affected by misconduct risk is likely to cause fragility in the whole sector through the contagion effect. In this respect, it is noteworthy that the total amount of fines imposed on large banks such as Societe Generale, HSBC, BNP Paribas, Citigroup between 2010 and 2015 reached EUR 200 billion (Chart 3). 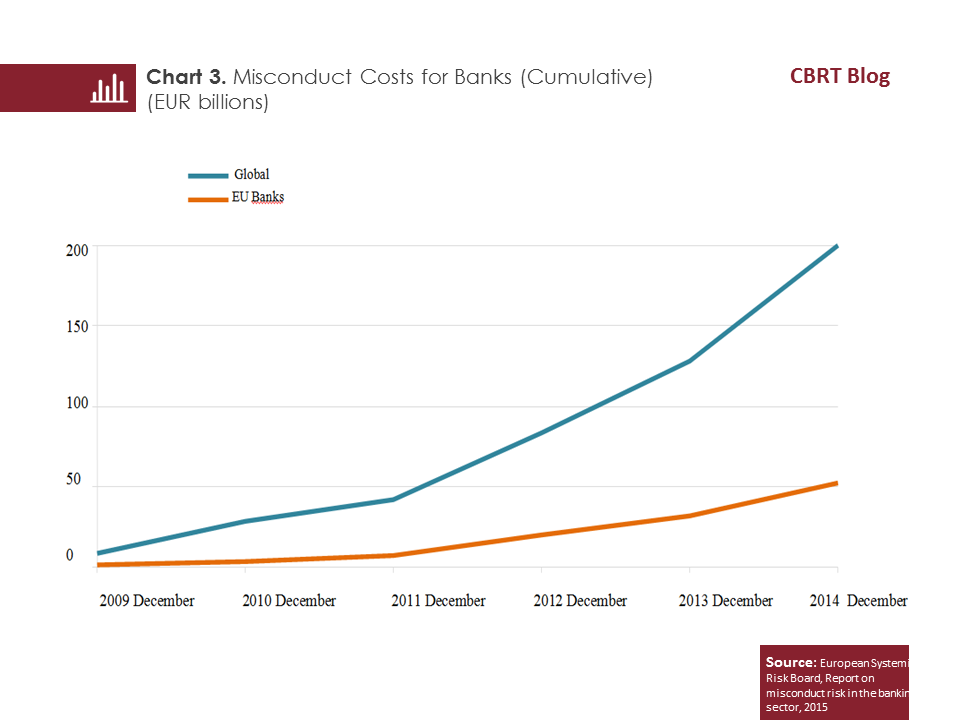 Concerned that misconduct in certain financial institutions reached a level that had the potential to create systemic risks and undermine the benefits of global reforms, the Chairman of the Financial Stability Board (FSB) sent a letter to G20 leaders. The letter said that the FSB would examine whether the reforms to incentives, for instance to risk governance and compensation structures, were having sufficient effect on reducing misconduct and whether additional measures were needed as well as the progress of reforms to benchmarks, and whether steps were needed to improve global standards of conduct in the fixed income, currency and commodities markets. At the 2016 Hangzhou Summit addressing the work initiated in the scope of the workplan prepared by the FSB in 2015, G20 leaders requested a progress report to be presented at the 2017 Hamburg Summit.[3] The progress report presented at the G20 Hamburg Summit organized on 7-8 July 2017 lists the measures to reduce the misconduct risk in the financial sector under three main headings and several sub-headings:

Turkey’s banking regulations do not offer a clear definition of misconduct. However, the Banking Law, the Regulation on Internal Systems of Banks and Assessment of Internal Capital Adequacy, the Regulation on Banks’ Corporate Governance Principles, and the Regulation on Information Systems Audit to be made in Banks by Independent Audit Institutions form the legal basis for an overall identification and evaluation of misconduct in banking institutions. Through inspections conducted by the Banking Regulation and Supervision Agency in the scope of these regulations, penalties are imposed after misconduct is identified and depending on the nature of the offence, the case is taken to court if deemed necessary. The Communiqué on Corporate Governance is taken into account for the corporate governance of partnerships operating in capital markets. In addition, provisions of the Communiqué on Principles of Establishment and Activities of Investment Firms are applied to misconduct in investment firms. The insurance sector is subject to the Insurance Law, the Regulation on Insurance, Reinsurance and Pension Companies, and the Circular on Principles of Corporate Governance in Insurance, Reinsurance and Pension Companies. Through these regulations, the relevant institutions form a governance framework against the misconduct risk and become obliged to establish an effective internal audit system.

As in the case of Societe Generale where the bank incurred a loss of EUR 4.9 billion in 2008 due to unauthorized futures transactions by one of its employees that went unnoticed for a long time, misconduct can be a severe factor of fragility for financial institutions. Misconduct that increases particularly in periods of accelerated financial innovations not only causes damage to institutions but also leads to systemic risks by triggering a confidence crisis that may spread through the whole system through the contagion effect. A weaker financial system restrains the corporate sector’s access to credit and reduces financial inclusion. It is important that the misconduct risk, which has been considered a firm-specific risk so far, is approached from a broader perspective, reasons for misconducts on domestic and global scale are carefully evaluated, appropriate policies are devised to take measures, and the resulting practices are followed up.

[4] Work is carried out to address cultural risk factors, information gaps and lack of due diligence by employees that lead to misconduct risk and to identify the responsibility maps of institutions. On the other hand, the work on the supplementary guidance to the FSB Compensation Standards is aimed to be completed by the end of 2017.

[5] The FSB carries out work to reform major interest rate and FX benchmark setting to reduce manipulation risk caused by financial institutions. The IOSCO released its “Principles for Financial Benchmarks” (https://www.iosco.org/library/pubdocs/pdf/IOSCOPD415.pdf) in 2013 and the “Guidance on Statements of Compliance with IOSCO Principles for Financial Benchmarks” (https://www.iosco.org/library/pubdocs/pdf/IOSCOPD549.pdf) in 2016. As a complementary document, the IOSCO is also preparing a statement for the public to consider when selecting benchmarks and for contingency planning. Both the FSB’s and the IOSCO’s work are aimed to be finalized in October 2017.

European Systemic Risk Board, Report on misconduct risk in the banking sector, 2015