An Evaluation on Food Prices from the Perspective of Foreign Trade

For Turkey, food prices are in a more critical position due to their high share in household consumption expenditures, as in the case of several emerging economies.

The course of food prices is crucial to the effectiveness of policies geared towards achieving price stability. The recent high volatility in food prices due to rapid population growth and climate changes has brought this connection to the forefront. Given that food products are a key element of essential consumption, developments in food prices remain an agenda item for the public and policy makers. Therefore, excessive movements in food prices constitute a risk factor that directly affects both the consumer welfare and the capacity of central banks to ensure price stability. For Turkey, food prices are in a more critical position due to their high share in household consumption expenditures, as in the case of several emerging economies.

The components of excessive food price volatility in Turkey, such as seasonal supply and structural problems in the production-consumption chains are relatively well known. However, there is limited knowledge on the role of foreign trade in food prices, which is influential on both product supply and price behaviors, in determining the national equilibrium price. After discussions of a possible use of foreign trade measures to offset excessive movements in food prices within the Food Committee, this issue has gained further importance and become an important research matter.

It is difficult to econometrically identify the impact of foreign trade on prices as international demand and prices, which determine the foreign trade, also affect the domestic balances in open economies. In order to overcome this econometric challenge, there is a need for an external shock that will cause prices to move independently of economic fundamentals. As a result of an unexpected deterioration in Turco-Russian diplomatic relations in November 2015, the restrictions imposed on the export of some food products to Russia from January 2016 on constituted an ideal natural experiment to study the effect of foreign trade on food prices. Turkey’s high export volume of food products to Russia suggests that the sanctions might have an impact on food prices that is both detached from economic fundamentals and economically significant. This provides us with an opportunity to analyze whether foreign trade policy might be instrumental in stabilization of food prices.

In our study, we analyze the impact of foreign trade sanctions on fresh fruit-vegetable (FFV) prices [Sevinç, Torun and Tümen, 2016]. The basic assumption used for the econometric identification of the effects on prices is that the sanctions are external and random in terms of the types of FFV that they affect and that the products subject to sanctions are very close to unaffected FFV items in terms of price determinants and consumption. A sudden cut in the exports of certain products may push the prices down directly through a rise in domestic supply as these products are non-durable consumption products and indirectly through expectations due to the uncertainty over when the bans will be lifted. Although the likelihood of finding new markets for sanctioned products can potentially limit this effect, it does not seem possible to shift the excess supply of products fully to other export markets in the short run. This situation can also be vindicated by export figures. 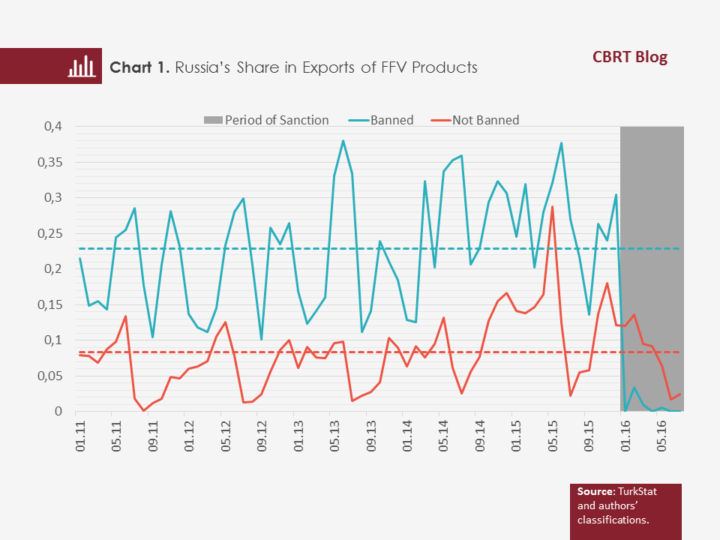 Notes: Series show the ratios of both Russia-sanctioned export products and of the volume of exported products to Russia that are not affected by sanctions in total exports as average values for each group and month. Dashed lines indicate the averages prior to January 2016. Export quantities have been converted to COICOP classification from harmonized system classification by the authors.

Chart 2 shows the recent course of revised FFV prices adjusted for seasonal effects as well as for common inflation trend with regard to product groups subject to and not subject to sanctions. When adjusted for seasonal effects and the common growth rate of FFV prices, prices of sanctioned and unsanctioned products tend to oscillate around zero. Furthermore before the sanctions took place, both series moved together in a way that cannot be statistically rejected. However, a significant divergence started in January 2016, on the back of a sharp decline in the average prices of the products subject to sanctions.

Our analysis taking into account the aforementioned effects indicates that in the first eight months of 2016, the prices of products that were not bound by export restrictions by Russia did not record a significant change, yet the prices of products affected by sanctions fell within a range of 30-40 kuruş on average. This decline corresponds to approximately 12 to 15 percent of the average prices of these products.

On the other hand, although the decline in exports to Russia of FFV products subject to sanctions in the first eight months of 2016 was slightly offset by the increase in exports of these products to countries other than Russia, it is statistically significant in overall terms. It is noteworthy that the relative decline in total exports of these products has boosted domestic supply in the short run; but considering that this increase does not even reach 1 percent of the annual FFV production, the estimated price effect is substantial.

In addition to documenting the impact of economic sanctions on prices, our findings suggest that foreign trade-driven shocks can affect domestic prices not only through external prices but also through the supply channel. On the other hand, it makes us think that the exaggerated pass-through of relatively modest changes in supply onto prices due to the current structural conditions can also work in the downward direction. Our results support the argument that foreign trade is an important channel that affects food prices in Turkey and that foreign trade policies might be directly associated with price stability. Nevertheless, considering the strategic importance of agricultural production and its contribution to the national economy, foreign trade measures to stabilize supply and prices of food products should be designed with a cautious and a prudent approach. 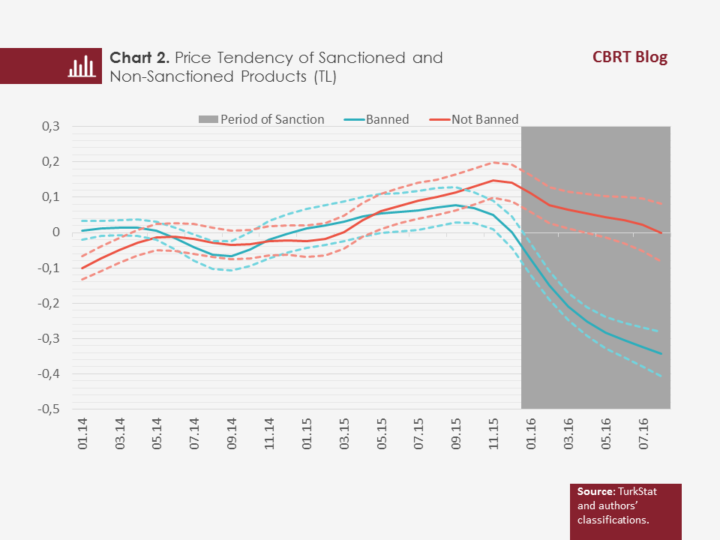 Notes: Series are local polynomial-smoothed group averages of residuals obtained from the regression of FFV prices on month-item fixed effects and a quadratic polynomial of time trend. Dashed lines denote lower and upper ends of the 95% confidence band of the same colored series.