Which Factors Have Been Determinant In Inflation Dynamics Over The Past Decade?

A holistic approach incorporating joint efforts of all stakeholders in the disinflation process can ease the policy trade-offs and thus make a significant contribution to achievement of lasting price stability at lower costs.

During the inflation targeting period from 2006 to 2015 in Turkey, the course of annual consumer inflation remained significantly higher than inflation targets at an average rate of 8.2 percent. An assessment of the key macroeconomic drivers of the inflation process during this period may yield valuable insights for the policies to be implemented for price stability in the period ahead. 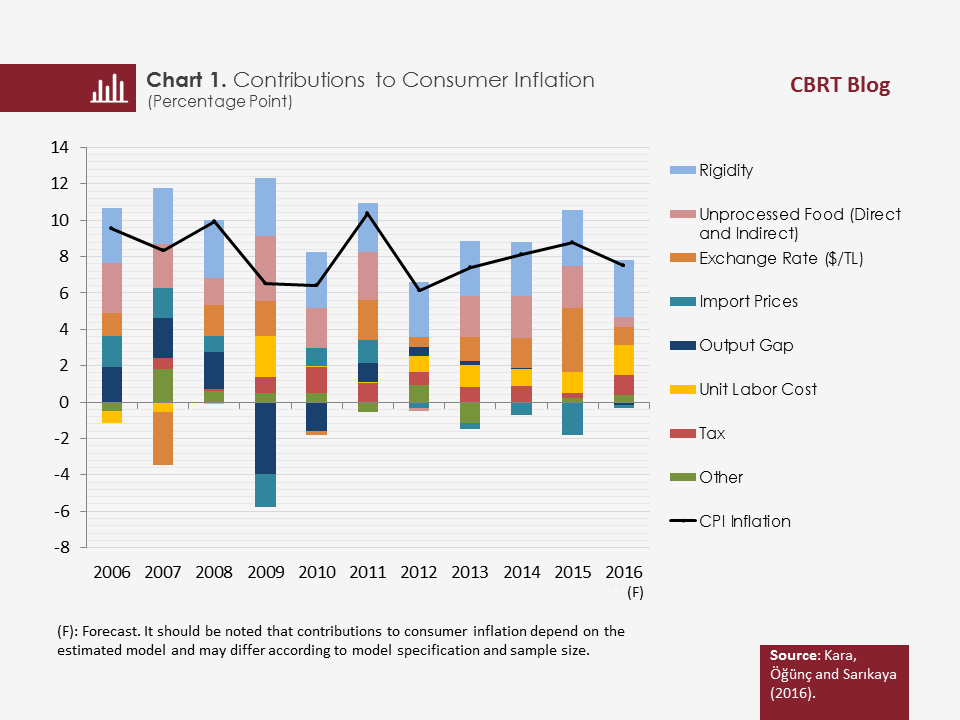 Analysis by Kara, Öğünç and Sarıkaya (2016) suggests that one of the most significant contributions (with direct and indirect effects) to consumer inflation during the period of inflation targeting came from unprocessed food prices (Chart 1). During this period, the direct annual contribution of unprocessed food prices to inflation was 1.4 points on average, reaching a total of 2.2 points when indirect effects through catering services are also taken into account (Table 1). What, then, are other prominent drivers, besides food? Exchange rate developments, tax adjustments and unit labor costs are also noteworthy with their contributions of 1.1 points, 0.7 points and 0.5 points, respectively. Although they vary over the years, the average contributions of import prices and output gap (by definition) are relatively limited. The part of inflation, which cannot be explained by these key economic variables, can be attributed to general rigidities with an average contribution of around 3 points. 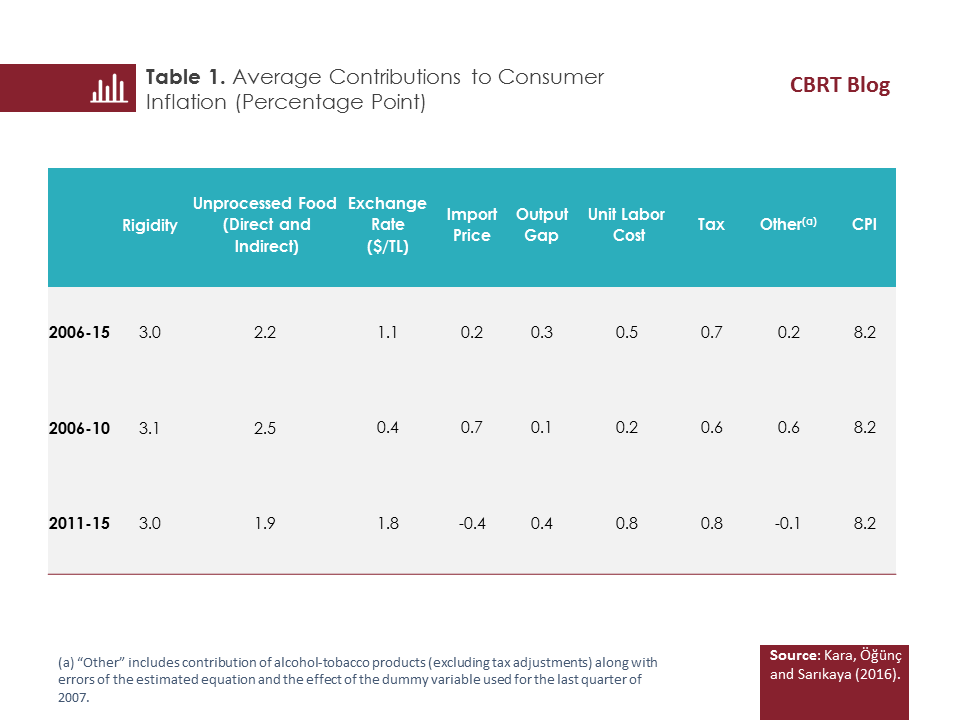 Is there Any Change in the Dynamics During the First and Second Five-Year Periods?

Yes, there is. A comparison between the period of conventional inflation targeting regime from 2006 to 2010 and the subsequent unconventional policy episode from 2011 to 2015 with multiple-objectives and multiple instruments reveals that, although the average inflation during both periods is the same, there is a remarkable change in the underlying drivers. The most striking point is that while inflation was mainly driven by external factors in the first five-year period, it was triggered more by main macro factors such as exchange rates, unit labor costs and output gap during the second five-year period. Moreover, key macro variables such as wage and exchange rates, which are also linked to inflation expectations, became more influential in the second period. This observation reveals how important it is to carry out expectations management effectively for price stability.

During the first half of the inflation targeting, as the pressure of the global demand on commodity prices was intense, the effect of external prices on consumer prices was strong (Chart 2). This trend reversed with the slowdown of the global economy in the second half. While the weakening in global growth and risk appetite in 2013 affected inflation favorably through commodity prices, it exerted upward pressures through capital flows and exchange rate channels. Especially after the Fed’s signal on tapering the quantitative easing in May 2013, capital flows towards emerging market economies lost pace. Against this backdrop, in the second period, the contribution of exchange rate to inflation increased by approximately 1.4 points compared to the previous period and stood at 1.8 points on average. In brief, the upward effect of the exchange rate on inflation during the period of 2011-15 was stronger than the downward contribution of external prices. 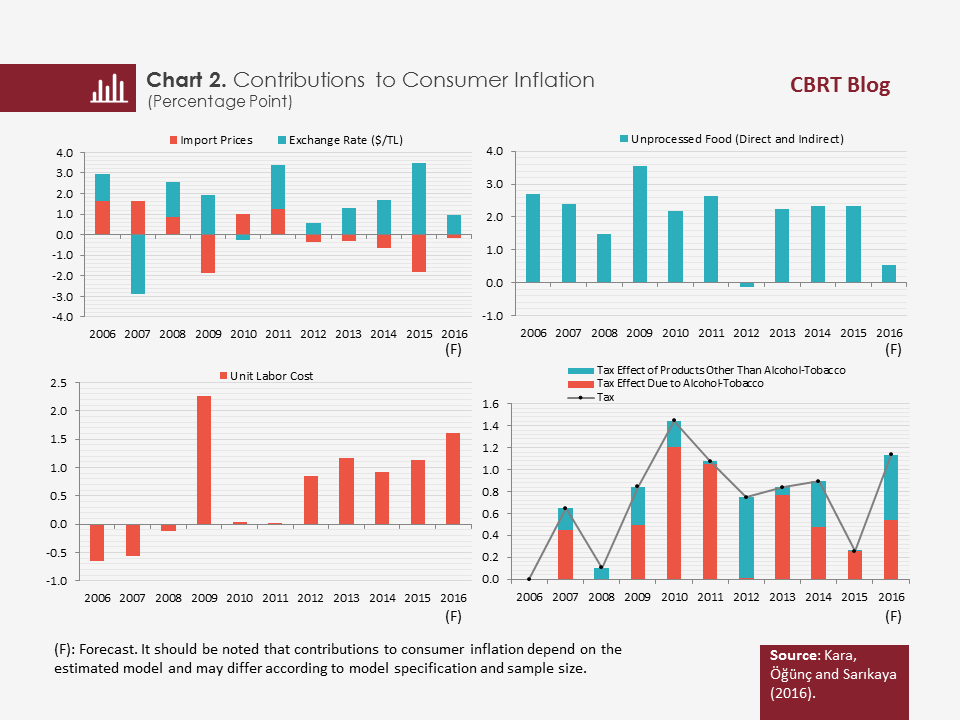 Another macro-driver, which has increasingly contributed to inflationary pressures in recent years, is the unit labor costs. In the first period, the contribution of this item to inflation was relatively limited at 0.2 points thanks to the productivity gains. During the second period, labor cost-driven pressures on inflation increased significantly due to more intensified nominal wage increases and subdued productivity growth.

Finally, it is also worth to mention tax adjustments to restore fiscal balances. The contribution of indirect taxes in the first and second periods of inflation targeting was 0.6 points and 0.8 points, respectively. In 2016, we estimate that the contribution of fiscal measures to inflation will exceed 1 point.

Policy implications of the findings can be summarized as: (i) The role of food prices in the inflation process points to the importance of addressing structural issues in the agricultural sector; (ii) The predominant role of the exchange rate on inflation reveals that issues such as improvement of the current account balance by increasing savings rate as well as decreasing dollarization and dependency on imported inputs are at least as important as demand management policies; (iii) High and volatile contribution of taxes on inflation highlights the importance of fiscal and monetary policy coordination in disinflation, and (iv) The gradual increase of unit labor cost-push pressures on inflation in recent years suggests that structural regulations to bolster productivity and increase the flexibility of labor market are crucial for price stability.

In sum, to achieve price stability, steps to be taken in structural dimensions seem to be as essential as the Central Bank’s ability to adopt a decisive stance on inflation. Therefore, a holistic approach incorporating joint efforts of all stakeholders in the disinflation process will ease the policy trade-offs and hence make a significant contribution to achievement of lasting price stability at lower costs.