What Does Turkey’s Success in the World Bank’s “Doing Business” Survey Imply?

Turkey moved up to rank 33 from rank 43 in the World Bank’s 2020 Ease of Doing Business Ranking, making significant progress by leaping 10 ranks at once.

Ömer Kayhan Seyhun is a Central Bank Specialist at the CBRT.

What is the World Bank Doing Business Survey?

The “Doing Business” (DB) survey of the World Bank measures the efficiency and quality of doing business in 190 countries. Launched in 2004, the survey evaluates country-specific developments and ranks countries. The survey examines 12 topics related to SMEs in particular. Table 1 shows the survey topics, and the number and regions of relevant reforms.

How is the survey conducted?

More than 100 people from real and financial sectors, public institutions, law offices, universities, and non-governmental organizations are surveyed on their fields of specialization. In this process, the Central Bank of the Republic of Turkey (CBRT) and the Banks Association of Turkey Risk Center (BAT-RC) contribute to the “getting credit” section.

Historical Background of the Survey

The survey, which used to cover five topics and 133 countries in 2004, was changed into a much more detailed report to cover 12 topics and 190 countries in 2020. Accordingly, the time interval and coverage of the report were expanded, and country scores were introduced via a methodological change in addition to the existing country ranking. Thanks to this more specialized method, the World Bank adopted a reporting strategy that offers more information about improving countries and regions, and that underlines the reforms achieved instead of negativities.

What are the highlights of the survey?

Based on this reporting strategy, a total of 3,794 reforms have been implemented worldwide since 2004. According to the most recently released 2020 Report, 115 economies implemented 294 reforms across 10 different areas in 2018 and 2019, thereby constituting the period [1] with the second largest number of reforms.

The country-based version of the same analysis reveals that although Saudi Arabia was ranked the 62nd with eight reforms, it became the best-performing economy among others due to the 7.7 points of increase in its score over the previous year. In addition, Nigeria, which is ranked the 131st in the world ranking, is the 10th in this ranking (Table 2). 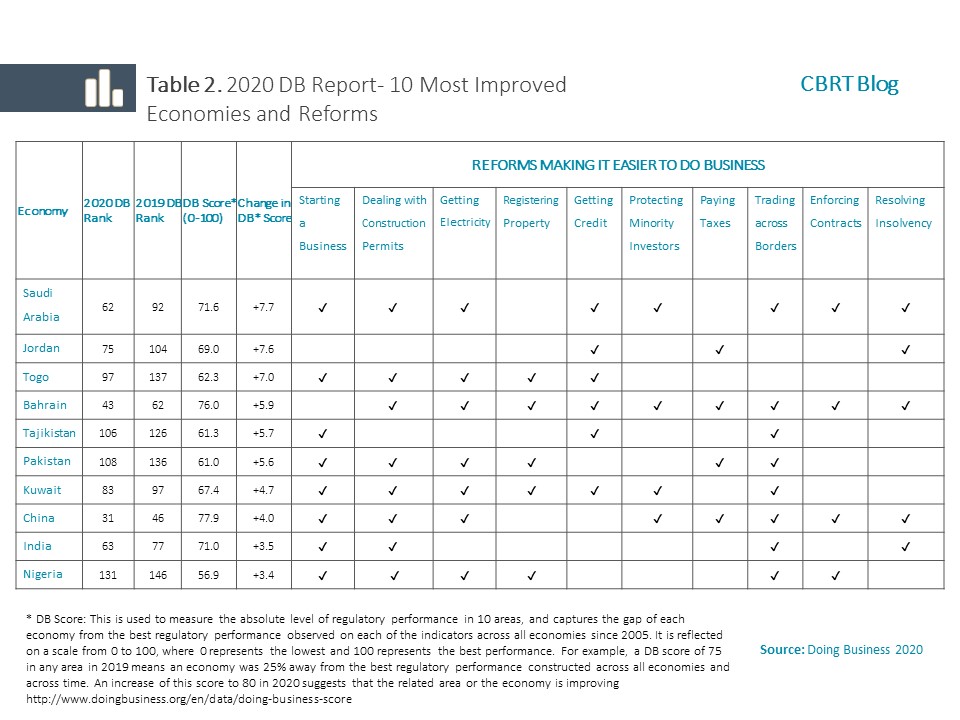 Turkey’s Progress and Its Ranking across the World

Turkey advanced to the 55th rank among 189 member economies in the DB Report of 2015 from the 60th rank among 183 economies in the 2010 DB Report. In 2019, Turkey climbed by 17 ranks at once compared to the previous year to the 43rd rank among 190 economies. It also entered the list of 10 most improved economies that registered the largest increases in score. Turkey’s positive performance continued into the 2020 Report period, when it moved up by 10 ranks to the 33rd rank (Chart 1 and Table 3). 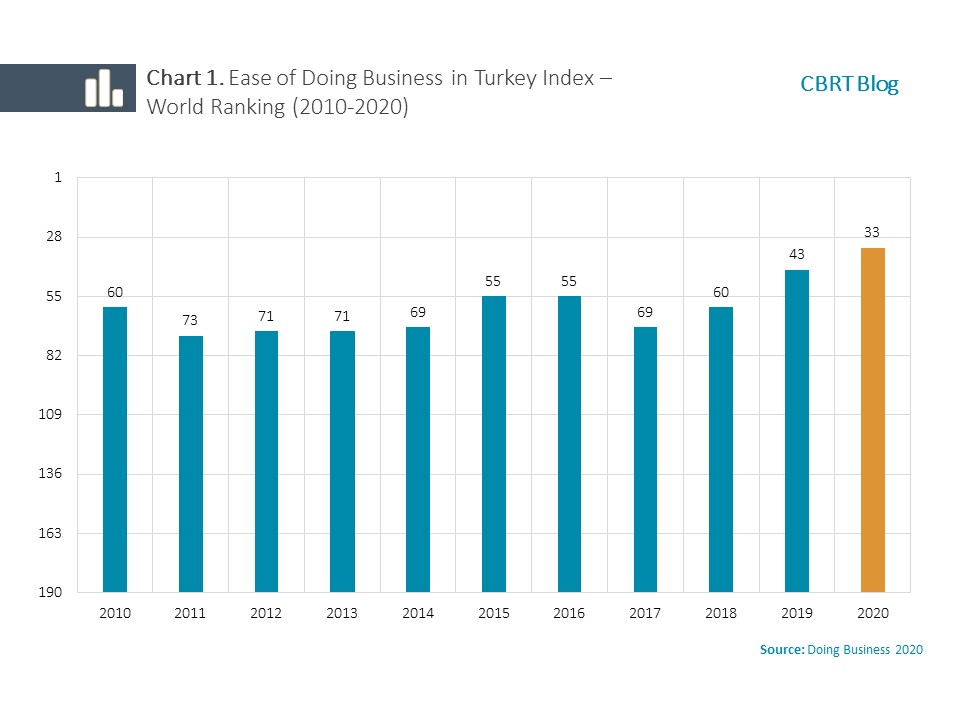 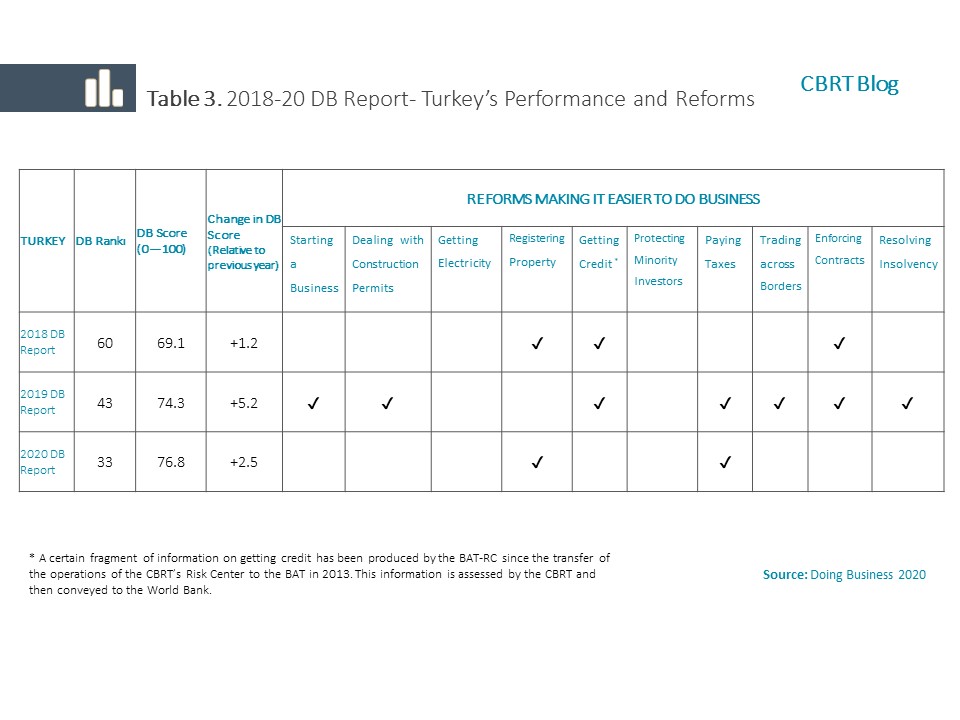 Table 3 summarizes the areas in which Turkey has registered an improvement in the last three years.

The seven areas with the largest number of reforms as noted in the 2019 Report are as follows: starting a business, dealing with construction permits, getting credit, paying taxes, trading across borders, enforcing contracts, and resolving insolvency.

What has been done in the two improved areas in Turkey in the 2020 Report?

The two improved areas in the 2020 Report are:

Registering Property: Fees involved in registering property as well as land registration charges have been reduced. Also, the transaction time for tax assessment has been accelerated.

Turkey’s improved areas and its performance can be summarized in two charts:

In addition, a comparison of the country rankings in the reports of 2019 and 2020 reveals that the “paying taxes” area has improved by 54 ranks over a year, providing the largest contribution in terms of improvement. According to the same comparison, it is followed by “getting electricity” and “registering property” with a rise of 19 and 12 ranks, respectively.

Chart 3 demonstrates Turkey’s scores in the 10 topics in the “Ease of Doing Business Index”. Based on an overall reading of Chart 3 and Table 3, Turkey’s average score is 76.8 on a scale of 100.

To conclude, considering Charts 2 and 3 together, examples for Turkey and New Zealand clearly indicate that a high score alone does not serve as an indicator. In fact, even New Zealand, which takes the lead in the world ranking in terms of the average of all areas, may get low scores in some areas.

The DB country ranking is an important factor that affects countries’ access to foreign direct investment and financing. The DB Reports of 2019 and 2020 demonstrate that Turkey has climbed in the world ranking by 17 and 10 ranks in the last two years, respectively. The evaluations in the report emphasize that this rise has been driven by the acceleration of the reform process in the related areas.

[1] According to the 2019 Report, a total of 314 reforms were implemented worldwide, thus registered as the period with the largest number of reforms.

Ömer Kayhan Seyhun is a Central Bank Specialist at the CBRT.