The borrowing preferences of the corporate sector are important in terms of financial stability. It is obvious that the FX loan utilization by firms with no FX income is very risky. FX loan costs, which are supposed to be low, may significantly exceed the TL loan costs depending on exchange rate developments.

Ahmet Deryol is a Central Bank Specialist at the CBRT.

Corporate sector firms need to borrow to meet their working capital needs or finance their long-term investments. To meet this need, firms may borrow in Turkish lira or foreign currency. Although loan growth in firms was driven by TL loans in 2017, there were also periods in some years when loan growth was driven by FX loans. Moreover, firms can get foreign currency funding from abroad in addition to the loans they get from the domestic market. An analysis of firms’ total financial liabilities as of July 2017 reveals that they have 799 billion TL equivalent of TL-denominated liabilities and 991 billion TL equivalent of FX-denominated liabilities.

The predominance of FX-denominated loans in firms’ borrowing is associated with low costs. Well, do firms really bear lower costs when they borrow in foreign currency relative to TL-denominated borrowing? In this blog post, I will try to answer this question.

This section examines the effects of TL and FX borrowing based on financial statements of a fictional firm. Table 1 shows this firm’s balance sheet in the previous year. It is obvious that the firm had high leverage as of 19 October 2016. Let us assume that the firm had a one-year funding need of 1,000 TL on 20 October. The firm may get this funding in two ways: using 1,000 TL worth of TL-denominated loans, or obtaining 298.7 euro worth of FX loans and converting this amount to TL in the market (euro/TL rate: 3.3478). Regardless of whether the firm borrows in TL or FX, its balance sheet on 20 October is as follows.

Table 2 shows some indicators for exchange and interest rates.

Based on the assumption that the firm prepared an income statement on 20 October, the income statements for when the firm uses the loan in TL and when it opts for euro are given below. Here, the change in items other than financing expenses is hypothetical. As can be seen, the firm maintains profitability if it obtained TL loans a year ago, whereas it incurs a loss if it obtained FX loans. Taking into account the exchange rate developments as well, the firm has to bear an annual cost of 33.26 percent for its euro loans whereas this cost is 13.59 percent for its TL loans. 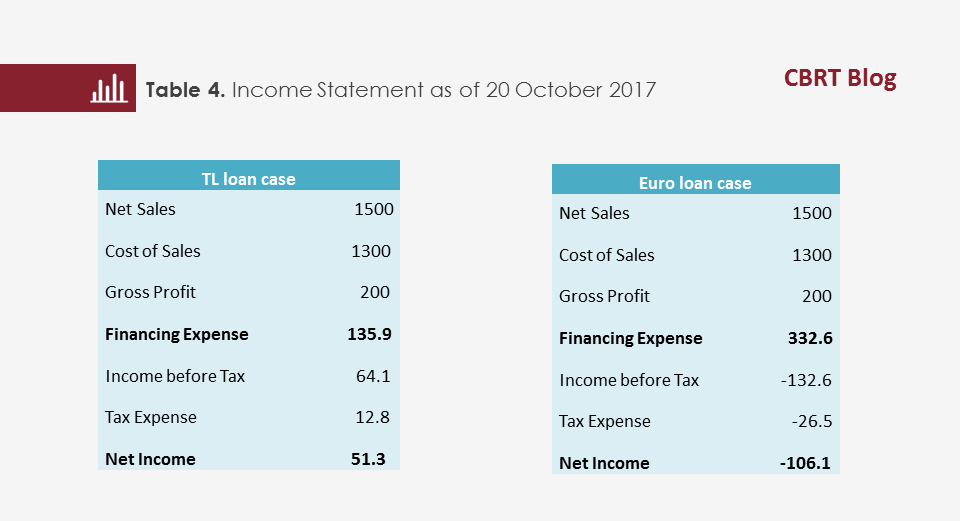 Now, let us look at the impact of the income statement figures on the balance sheet. In the event that both the principal and interest payments are made in cash on the maturity date, the balance sheet will be as in Table 5 on 20 October 2017. Accordingly, the firm is able to continue its activities with positive equity if it got TL loans a year ago whereas it loses its equity if it obtained euro loans.

When evaluating TL and FX borrowing options, exchange rate developments should also be taken into account in addition to nominal interest rates. In case of a depreciation in the TL corresponding to the interest rate difference between FX loans and TL loans, the financing costs of the firm are the same for TL and FX borrowing. However, if the depreciation in the TL is higher than the interest rate difference, financing costs of FX loans may increase significantly. Conversely, if the TL appreciates, the firm may bear a lower cost for FX loan compared to TL loan. In this respect, FX borrowing implies a speculative meaning for a firm with no foreign exchange income.

Firms’ total loan costs can also be calculated as a time series via a more dynamic calculation method of cost difference. In this method, it is assumed that firms use 1-year loans as of each period and roll over these loans at maturity. In case of FX loan utilization, firms bear a currency depreciation cost in addition to the FX loan rate. In certain periods, they may both meet their funding needs and gain profit due to an appreciation in the TL. For instance, a firm which used euro loans with a maturity of 1 year in January 2014 gained a profit corresponding to 13 percent of the loan amount in January 2015. On the other hand, firms endured higher costs for FX loans compared to TL loans in the majority of periods. Chart 1 clearly reveals the speculative nature of FX borrowing. 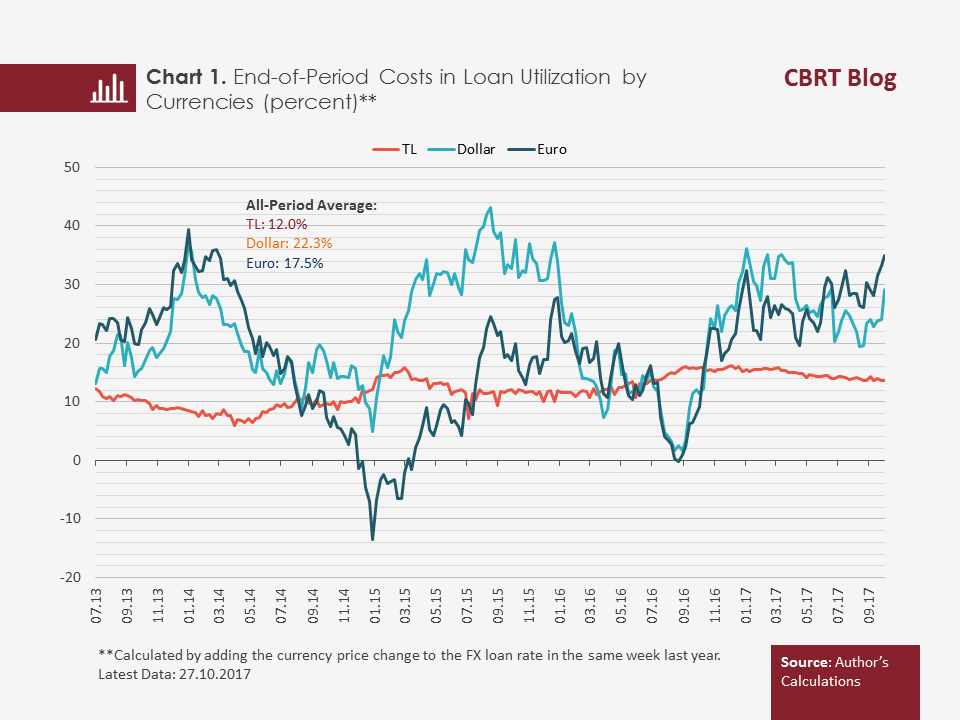 The borrowing preferences of the corporate sector are important in terms of financial stability. It is obvious that the FX loan utilization by firms with no FX income is very risky. FX loan costs, which are supposed to be low, may significantly exceed the TL loan costs depending on exchange rate developments. Particularly since 2013, the average FX loan cost has displayed a considerably high volatility over time and been significantly above the TL loan cost. All these evaluations demonstrate that the FX borrowing by firms with no FX income has a speculative nature.

Ahmet Deryol is a Central Bank Specialist at the CBRT.