Deposit maturities in Turkey are short and historically there has been a close relationship between the short term market rates –on which the CBRT has been decisive- and the Turkish lira deposit rates.

Koray Alper is an Advisor at the CBRT.

Deposit interest rates play an important role in banks’ loan pricing as deposits have a high weight in total liabilities. Deposit maturities in Turkey are short and historically there has been a close relationship between the short term market rates –on which the CBRT has been decisive- and the Turkish lira deposit rates (Binici, Kara and Özlü, 2016)[1]. Nevertheless, this relationship has significantly weakened as of the final quarter of 2014. Actually, since that quarter, the spread between TL deposit rates and money market interest rates has steadily widened (Chart 1). In this posting, we will present a summary of our analysis and evaluations suggesting that the recent downward rigidity in TL deposit rates was mostly driven by banks’ quest for stable funds and by short-term liquidity, albeit with a more limitied impact.[2] 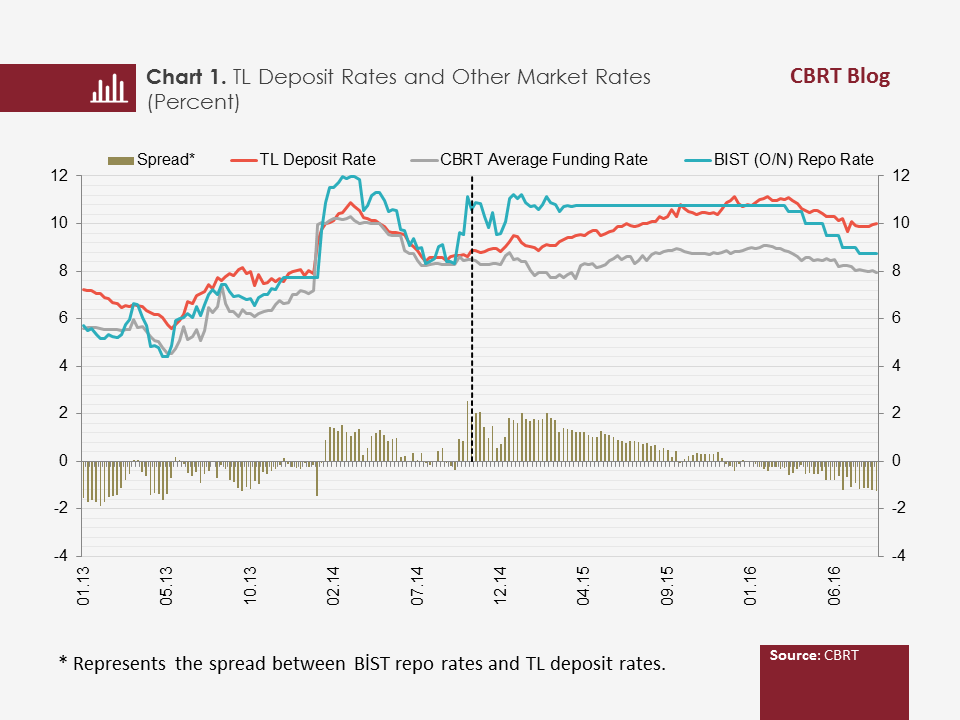 In pricing TL deposit rates, the costs of alternative sources and accessibility of these sources are expected to play an important role. The most important sources that can be considered as an alternative to TL deposits are borrowing from money markets and external markets.[3] There has been no significant change in the interest rates on the BIST where almost all money market operations take place or in external borrowing costs that can explain the dynamics of deposit rates.[4]

The change in the costs of alternative sources fall short of explaining the dynamics in TL deposit rates and this suggests that these sources’ capability to serve as substitutes for deposits might have weakened. This may be due to the reduced access to alternative resources and/or the fact that the characteristics which distinguish deposits from related sources have become more important in this period. The external debt roll-over ratios as well as the developments in costs refutes the argument that there is difficulty in access to these sources. In this period, the BIST rates materialized at the upper bound of the interest rate corridor that the CBRT committed to provide unlimited liquidity against collateral, and banks were not at the limit of free GDDS stock, thus it can be asserted that there were no constraints in access to money markets. Therefore, the high level of TL deposit rates is likely to have stemmed from the increased importance of the characteristics that distinguish deposits from other sources of finance.

The main factors that make deposits more advantageous compared to other sources of funds are: i) they do not require collateral, and ii) they are relatively stable sources of funds. Unlike deposits, borrowing from money markets is against collateral and therefore it adversely affects the liquidity position of banks.[5] Deposits’ being more stable funding sources make them more valuable with respect to banks’ structural or longer-term liquidity position.  At times of stress, banks may have difficulty in rolling over their external funding sources, which are considered as non-core liabilities. Banks, which are highly dependent on non-core funding, bear the risk of facing short-term liquidity position problems in the long term even if they have strong short-term liquidity positions. Banks, which have liquidity shortages, either may not overcome this difficulty or they might have to experience costly disruption in their loan supply. Recently, banks have been putting more emphasis on funding stability in investor presentations and this also confirms the importance of funding stability for investors. 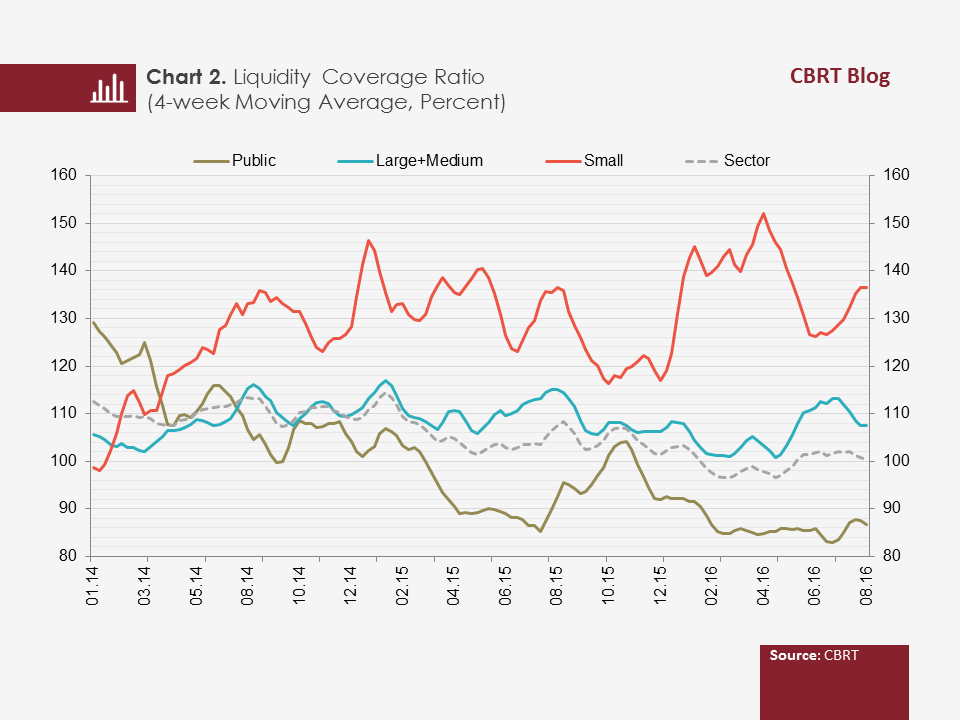 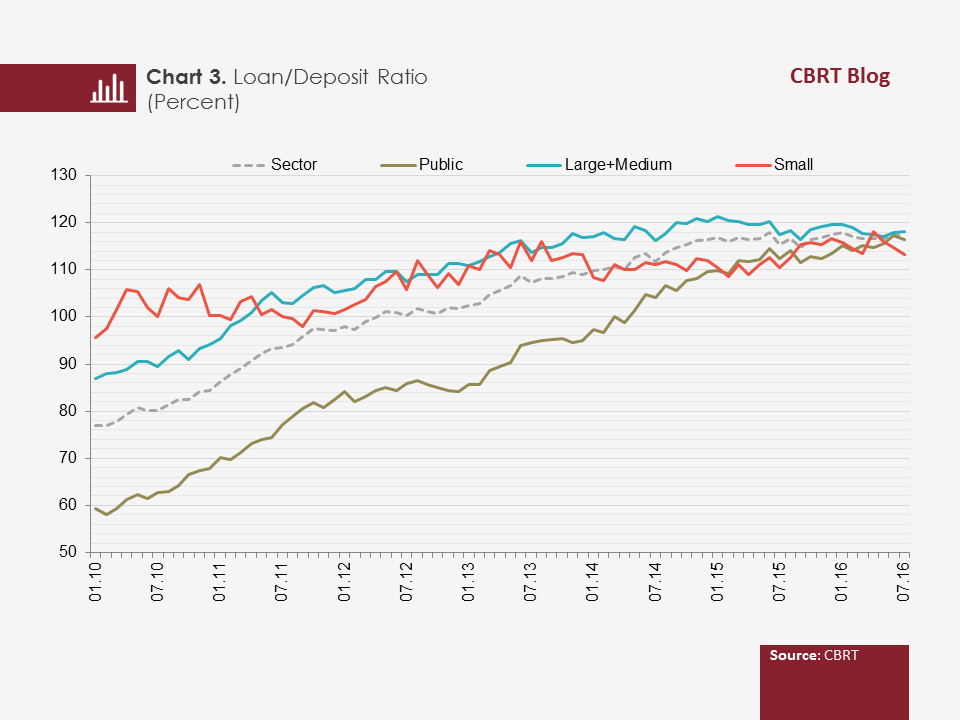 In this framework, we examined the relationship between banks’ short-term liquidity positions and their dependence on non-core liabilities, with TL deposit rates. For an indicator of banks’ short-term liquidity positions, we used the Liquidity Coverage Ratio (LCR) that is monitored by the BRSA and limited by regulations.[6] It was observed that the average LCRs for sectors and bank groups have not significantly deteriorated over the last three years and the latest data indicate that they have actually exceeded legal limits by a significant margin (Chart 2). To represent banks’ dependence on non-core liabilities, the Loan to Deposit ratio (L/D) was used. The reason for choosing the L/D ratio among other alternative indicators is that banks prefer to use this ratio to emphasize the stability of funding sources in the presentations that they make to investors. This ratio, which was on a steady uptrend until the end of 2014, has been relatively flat since the beginning of the deposit competition (Chart 3). 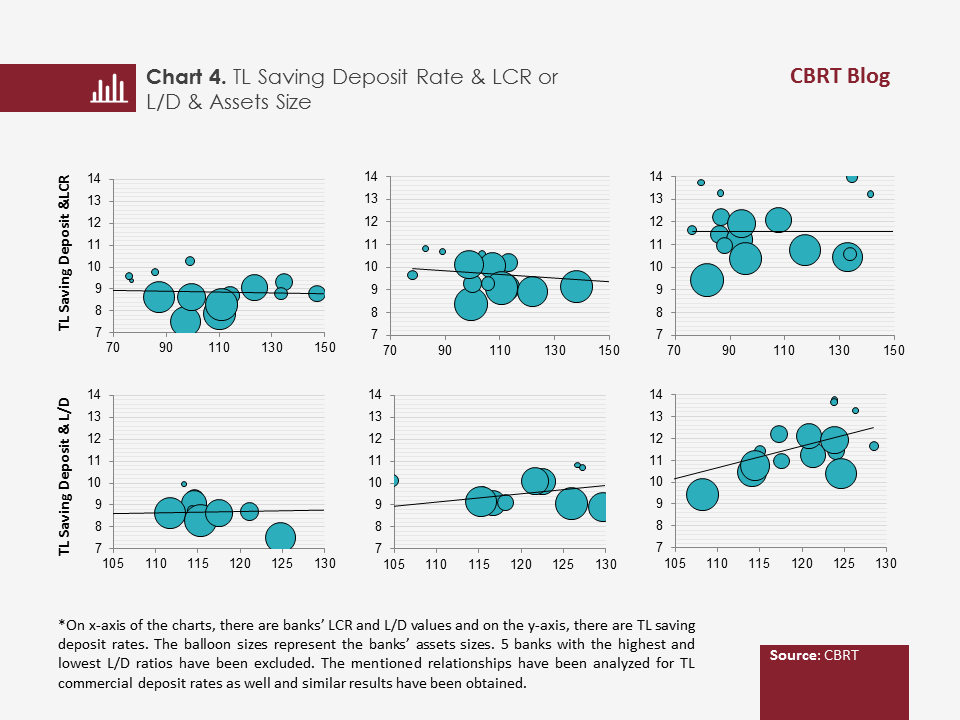 Econometric analyses, unlike correlation analysis, indicate that banks with LCR rates close to legal limits tend to raise interest rates on TL deposits. Findings confirm that the L/D ratio, which is also implied by correlation analysis, has a strong impact on TL deposit interest rates.[7] We have found that this impact is stronger when the L/D ratio is above 110 percent.

To sum up, our findings indicate that banks want to contain their dependence on core liabilities at a certain level due to their own evaluations or fund owners' evaluations, and thus demand for deposits and deposit interest rates is increasing. Secondly, we found that banks which had short-term liquidity positions close to the legal limits had higher demand for deposits.

The results of our study confirm the necessity of the steps taken towards increasing savings rates in our country. Savings rates have been increasing since 2013 thanks to the measures taken and this uptrend is expected to continue on account of recent measures.

[2] The study, on which this analysis is based, was published as a Research Notes in Economics with the title “Banking Sector’s Liquidity Position and its Relation to Deposit Rates”.  (in Turkish only)

[3] FX external funds can be converted to Turkish liras at the swap market.

[4] The interest rate movements at the swap markets on which FX liquidity is converted to TL has remained more limited compared to the change in TL deposit rates.

[5] In Turkey, almost all of the money market transactions are carried out against collateral. However, in cases where banks can find sources without collateral, their liquidity positions will also be disrupted as the liquid liabilities of the banks will increase.

[6] The Liquidity Coverage Ratio (LCR) shows to what extent the high-quality liquid asset stock on banks’ balance sheets will meet the banks’ 30-day net cash outflows. The LCR is subject to sanction since 2015, the LCR lower limit was set at 60 percent for the first year, the ratio will be incremented by 10 percent each year to be fixed at 100 percent in 2019.

[7] Even if there is no legal limit for L/D ratio, the anecdotal data suggest that banks consider ratios close to 120 percent as the optimal upper limit. The Net Stable Funding Ratio, which was introduced within the scope of BASEL III and is planned to be put into practice in 2018, compels meeting 100 percent of stable funding requirements from stable funding resources. However, unlike the L/D ratio, the net stable funding ratio accepts long-term non-core funding as a stable funding source with a certain deduction.

Koray Alper is an Advisor at the CBRT.