Are Financial Cycles Deviating from Business Cycles in Turkey?

In Turkey, we can assert that credit market developments mostly coincide with economic activity. Moreover, we find that the divergence between the duration of business cycles and credit cycles is not as severe as in other countries.

Samet Kütük is a Researcher at the CBRT.

Yavuz Selim Hacıhasanoğlu is a Director at the CBRT.

Mahir Binici is an Economist at the CBRT.

In the broadest terms, cycles can be defined as recurrent expansion and contraction phases that occur in a regular fashion. It is crucial to understand the peculiarities of business cycles as well as financial cycles to be able to develop timely and proper policy decisions. Actually, the relative characteristics of cycles do not only determine the effectiveness of the monetary and fiscal policies but also macroprudential measures that simultaneously address these cycles. Therefore, it is necessary to assess the characteristics of financial cycles in order to envisage the effects of macroeconomic policies to be implemented (Rünstler, 2016). [1]

In literature, there are alternative methods analyzing the characteristics of cycles and the relations among cycles. In this analysis, we have used turning point analysis (BB algorithm) developed by Bry and Boschan (1971) that is widely used in business cycles literature. By using the BB algorithm, we derive the peaks and troughs to identify turning points (Chart 1).  We take the turning points as reference while measuring the duration, amplitude and slope coefficients reflecting the characteristics of the cycle. 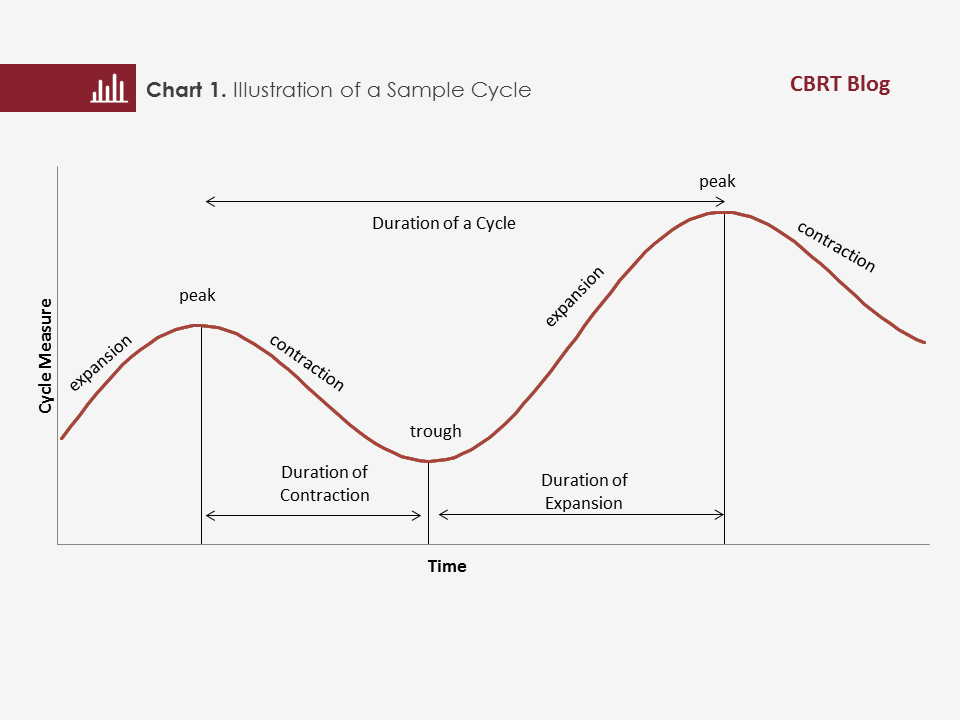 According to the results of the turning point analysis, we have found out that there were 6 business cycles between 1987 and 2015. [3] The number of financial cycles according to credit-to-GDP, real credit, real BIST100 and real effective exchange rates measures was 4, 5, 10 and 11, respectively. By definition, the larger the number of cycles, the shorter the duration is. Therefore, we can assert that the average duration of the equity and foreign exchange market cycles is almost half of the other measures due to higher number of observed cycles during the sample period. We think that this phenomenon is driven by the fact that these two indicators have higher sensitivity to external factors such as international capital flows. In a related study, Claessens et al. (2011) have analyzed the financial cycles in 21 advanced economies and concluded that it is natural to see more frequent expansion and contraction phases in equity markets due to their more volatile structures compared to loans markets. Thus, while evaluating the characteristics of financial cycles and their relations with business cycles, we will mostly refer to loan indicators.

The analysis of cycle characteristics reveals that the fluctuations in financial cycles in Turkey are significantly higher than fluctuations in business cycles (Table 1). While business cycles decrease by 5 percent on average during contraction phases, real credits decline by 27 percent and credit-to-GDP decline by 16.8 percent. As implied by higher slope coefficients, financial markets react to developments more quickly and the contraction is larger, but recovery is faster as well. The difference regarding amplitude and slope coefficients between financial cycles and business cycles dates back to the late 80s when financial markets were getting more liberalized and integrated with global markets. Therefore, we can assert that financial cycles are more responsive to both domestic and global conditions. 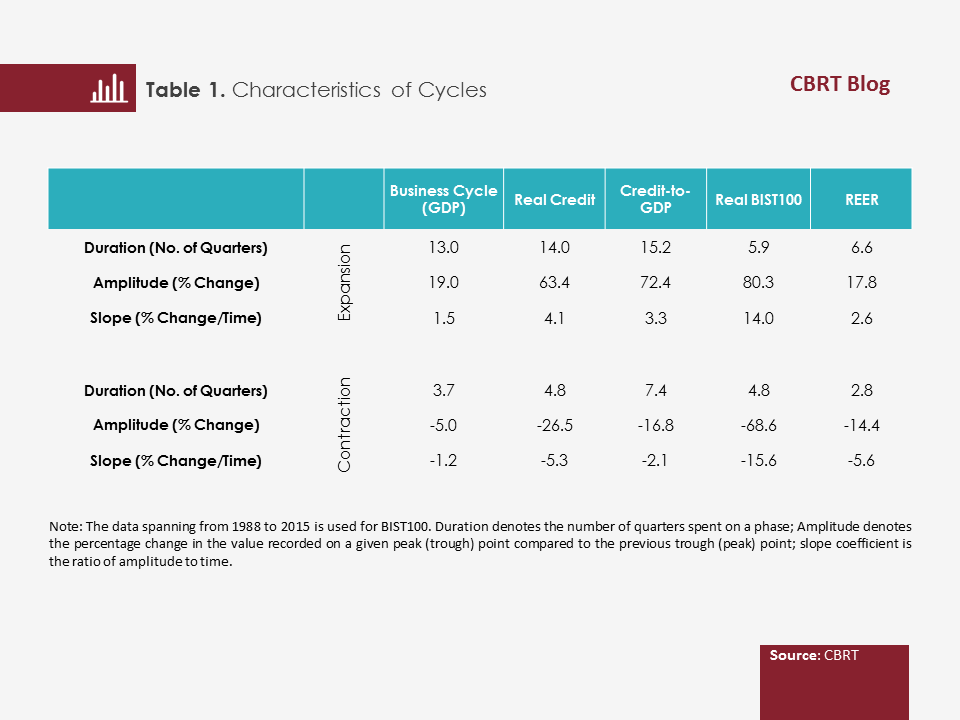 Claessens et al. (2012) calculated the concordance index for output and credit cycles for emerging economies for 1960-2007 and the result was 0.74 percent on average. Haavio (2012) calculated the concordance index for national business cycles and credit-to-GDP, equity and house prices for 1980-2010 in 17 OECD member states and the results were 0.67, 0.67 and 0.69, respectively.

The concordance index for Turkey indicates that the real credits highly commoves with business cycles (0.85) compared to other measures used in the analysis (Chart 2). Thus, the coincidence of credit cycles with business cycles is stronger compared to other countries’ averages. On the other hand, the turning points of the BIST100 and REER measures are observed earlier than business cycles, therefore the observed relation indicates that these measures can be regarded as a leading indicator of the general economic activity. 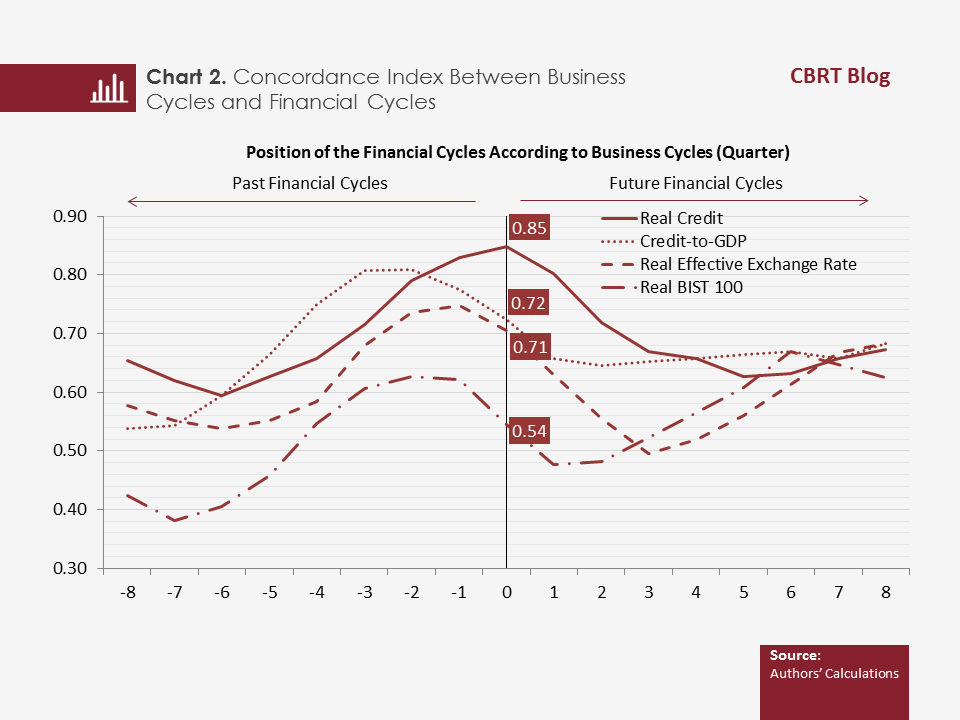 To sum up, in Turkey, we can assert that credit market developments mostly coincide with economic activity. Moreover, we find that the divergence between the duration of business cycles and credit cycles is not as severe as in other countries. Therefore, it is important to take the interaction between business cycles and financial cycles into account while designing the monetary, fiscal and macroprudential policies.

[1] This analysis is based on “Financial and Business Cycles in Turkey: How Different? How Related?“ (available only in Turkish, Turkish original: Türkiye’de Finansal Çevrimler ve İş Çevrimleri: Ne Kadar Farklı, Ne Kadar Bağlantılı?”, a CBRT Research Note in Economics (2016/26).

[2] Nominal credits and BIST100 index have been adjusted for price affects by using CPI.

[3] We aim to document high frequency cycles depending on sensor rules used in turning point analysis.

Mahir Binici is an Economist at the CBRT.

Yavuz Selim Hacıhasanoğlu is a Director at the CBRT.

Samet Kütük is a Researcher at the CBRT.